Three historic dams to be removed by Georgia Power 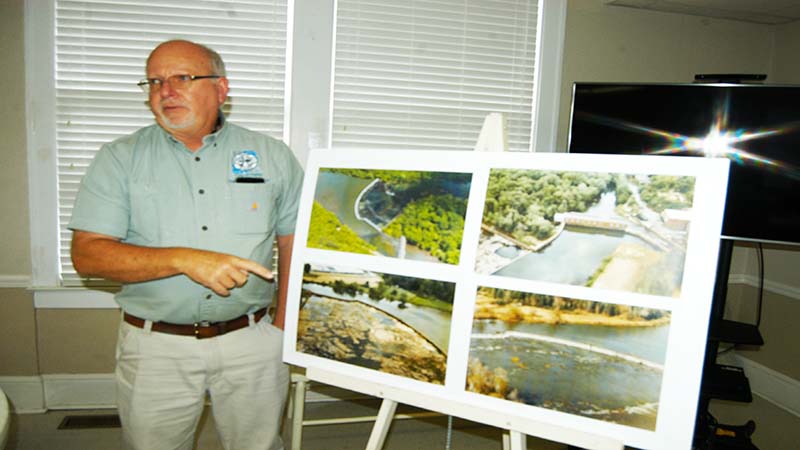 VALLEY — Some major changes will be taking place along Valley’s section of the Chattahoochee River in the coming years. City of Valley Planning & Development Director Travis Carter talked about them at Wednesday’s noon hour meeting of the Kiwanis Club of Valley

Three historic dams at Langdale, Crowhop and River View are going to be removed starting in 2023. Georgia Power has been looking at this for some time. The dams haven’t generated any electricity since 2009, but under Federal Energy Regulation Commission (FERC) rules, they must remain in operational condition as long as they are licensed to operate. This means regular inspections and keeping up equipment even though no power generation is taking place. It’s expensive to do this.

In 2018, Georgia Power sought permission from FERC too have the dams decommissioned. A study was completed in 2019 with the results being expressed at public hearings the next year.

Some sportsmen were opposed to removing the dams out of concern of what it might mean to this section of river’s shoal bass population, which has thrived in areas between the historic low head dams.

Some wildlife biologists who have studied the issue don’t believe there will be a harmful effect at all and could actually boost the shoal bass population. Removal of the dams will return the river to its natural course, and there will be more shoals for fish to live around.

It will take several years to demolish the structures that have been slated for removal. These include the three dams and the River View powerhouse. The Langdale powerhouse will remain and will likely be part of a new park setting.

The area behind the powerhouse will be filled in with dirt with picnic areas and pavilions being built on them. It should be an ideal place for picnicking, fishing and boating along the natural course of the river. Having a natural course of river should provide new impetus to the Chattahoochee Blueway, the 22-mile section of river between Hardley Creek Park and Lake Harding that could serve as a canoe/kayaking trail.

With the river back in its natural course, water won’t be flowing through the powerhouse.

The dams won’t be completely removed.

“There will be portions of the dams on both banks that will remain for historic and cultural purposes,” Carter said.

The 2020 study found that the Langdale boat ramp will be partially dewatered when there’s minimum water flow from West Point Dam and will have decreased velocities under all flows modeled. The Shawmut boat ramp will be dewatered at minimum flow and have reduced depth at other flows.

A large amount of silt has collected behind the dams over the years. There’s enough behind Langdale Dam to form a 189-acre field and a field of some 112 ares at River View.

Present plans call for most of Langdale Dam on the Alabama side to be removed but for a 300-foot section to be l0wered on the Georgia side. This will decrease velocity and to spread the flow across the river. A new island side channel will be built to provide water for the powerhouse tail race.

The plan has almost all of Crowhop Dam to be taken out. Ten-foot abutment sections would be left on both sides of the river and a new rock ramp added to help maintain an existing rock weir upstream of the River View channel entrance.

Most of River View Dam will be removed with 10-foot abutment sections remaining on both banks. The River View powerhouse would be removed and replaced with a berm to help constrain the flow to River View channel.

The fate of the shoal bass remains an unknown. It’s believed this popular game fish moved throughout the Apalachicola-Chattahoochee-Flint River region before any dams were built. As the name suggests, they prefer being in the rocky shoal areas and avoid reservoirs. The newborn fish live in depths of one to one-and-a-half feet with adults preferring water that’s around four feet deep. They prefer being in flowing water as compared to still water. A study by Patrick O’Rourke of the GPC Natural Resources Group found that the removal of the dams would restore aquatic habitats to a free-flowing condition, would provide greater connectivity among habitat types and would have the potential to increase genetic diversity of shoal bass and other river species.

“Removal of the dams will result in a net increase in optimal habitat for shall bass,” O’Rourke wrote.

The study found that 98 percent of the water inflows to Langdale Dam were from discharges at West Point Dam. Major tributaries along this section of river include Oseligee and Moore’s creeks in Chambers County and Long Cane Cane and Flat Shoals creeks on the Georgia side. The City of West Point and the Chattahoochee Valley Water Supply Districts have withdrawal permits. West Point, Lanett and the East Alabama Water, Sewer and Fire Protection Districts have wastewater discharge permits along this section of river. The section has a relatively low level of nutrients, indicating that West Point Lake is something of a “nutrient trap.”

The study contends that the removal of the dams should improve water quality along this section of river by restoring natural river conditions.

In the 2020 public hearings, Tony Dodd of the GPC Natural Resources Group presented findings from a study of what removing the dams would do to the river’s mussel population. He determined that there would be at worst a very minimal impact largely due to no endangered species living along this section of river.

Joey Charles of the GPC Natural Resources Group had a presentation on cultural resources. This included the results of archaeological studies on both river banks and on a 20-acre island in the river. Shovel tests were done at 10-meter intervals across the sites with digs of one to two meters being done at the sites. Artifacts such as broken pieces of pottery and projectile points were found and inventoried by Southern Research’s laboratory. The goal of the study was to develop a plan to avoid, minimize and mitigate adverse effects removal of the dams could cause to archeological resources. The study sought to determine if there was a need to document any known or unknown resources.