Three honored with presentation from Quilts of Valor 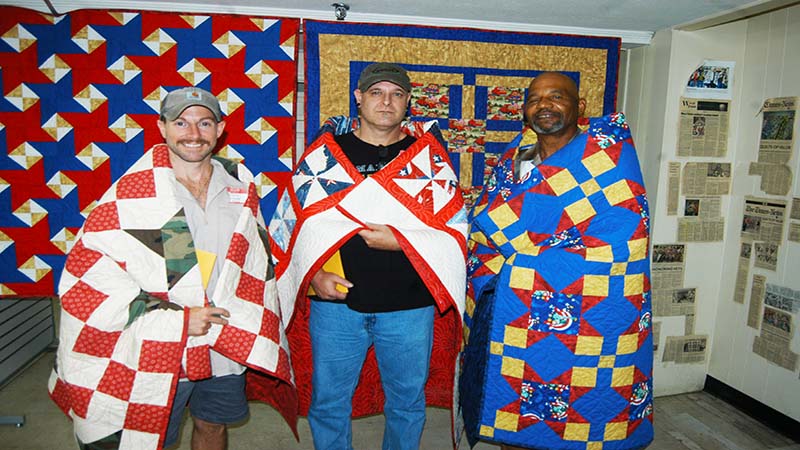 WEST POINT — Three veterans from the West Central Georgia region were honored Saturday with Quilt of Valor presentations. The quilts were made by the Georgia-Alabama State Line Quilters with the ceremony taking place at sewingmachine.com in downtown West Point.

The honorees include Kristopher Gilmore of Fayetteville and Elbert Saylor and Milton Smith, both of LaGrange.

“It was an honor for me to serve my country,” he said. “I am from a family that has served our country over several generations.”

His dad, Ronnie Gilmore, previously received a Quilt of Honor at sewingmachine.com. When Ronnie Gilmore was an infant, his dad, Marvin Gilmore from Lanett, was killed in the 1944 Normandy Invasion.

“I am grateful to be shown some appreciation for my service,” he said. “I love this country, and its people. I was willing to lay my life down for my country and the American people.”

Milton Smith was in the Army from 1968-71 and remained stateside during the Vietnam War. A lot of his church friends from New Macedonia Missionary Baptist Church in LaGrange were there for the presentation.

Quilts of Valor spokesperson Sheila Simpson welcomed everyone to the program and told a packed audience she hoped they enjoyed their time in West Point.

“There’s a lot to do here,” she said. “We are a town with a river flowing through it, and we have a lake nearby. There’s lots of fishing, camping and boating going on at West Point Lake.”

The ceremony began with the playing of recorded versions of songs for each branch of service: “The Caissons Go Rolling Along” for the Army, “Anchors Aweigh” for the Navy, “Semper Veritas” for the Coast Guard, “Off We Go Into the Wild Blue Yonder” for the U.S. Air Force and “The Marine Corps Hymn” for the U.S. Marines.

It took Roberts’ small group some three years to make and award 100 quilts but as word spread about what they were doing, chapters started organizing all over the U.S. In May 2014, the 100,000th quilt was presented. Since then, the number of presentations in the U.S. has surged past the 300,000 mark. It now stands at 315,840.

The local chapter has made a special effort to award quilts to veterans of World War II and Vietnam. Those Americans who came of age during WW II have often been called “the Greatest Generation.” Precious few veterans of that war are still living. The Vietnam War was a divisive period for our country, and some Americans were rude to soldiers returning home, insulting them with such reckless comments as “baby killers.”