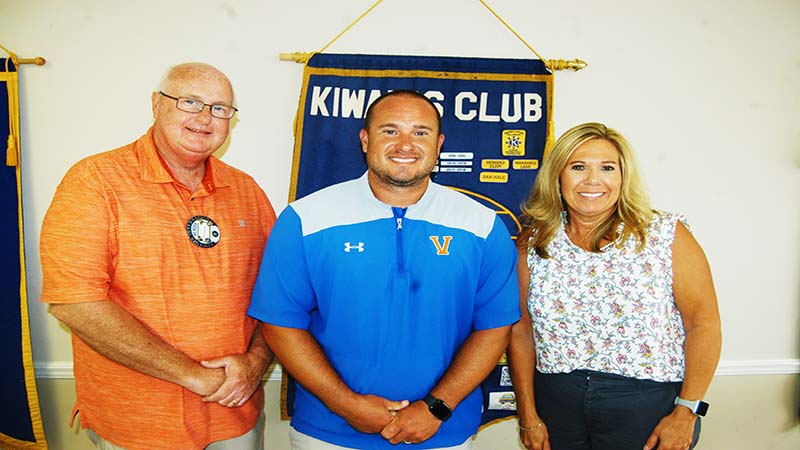 VALLEY — The 2022 high school football season is fast approaching. On Wednesday of this week, Valley High Head Coach and Athletic Director Adam Hunter was the guest speaker at the noon hour meeting of the Kiwanis Club of Valley and previewed the upcoming season for the Rams.

Hunter has been with the VHS program for 16 years and is entering his third year as the team’s head coach.

The Rams struggled the past two years in 6A but hope to fare better this season after dropping down to 5A.

In 6A, almost every week your team will be going up against teams with Division I college prospects. While a school like Valley is lucky to have as many as 60 players on their squad, a school like Opelika High will have 100. It’s very difficult to compete against schools that have more depth and proven experience than your team does.

“We had four wins in 6A football the past two years,” Hunter said. “That wasn’t bad considering we were one of the smallest schools in 6A. What we went up against the past two years should help us at the 5A level. We were accustomed to playing a faster and more physical game than what we will see in 5A.”

Compounding Valley’s problem last year was the fact they didn’t have that many seniors and they had to play more than half of the season with gifted quarterback Cam Dooley injured and unable to play.

Dooley, who stands six-foot-four with a great throwing arm and good speed, is back for his junior year. The team also has much experience returning on defense and in the offensive line.

“Every starter is back on defense,” Hunter said, “and our best offensive linemen from last year are back. We will have some guys going both ways, but only one of them (Marquis Madden) will play extensively on offense and defense.”

Valley will have two very good players at linebacker. Kenneth Stephens and Isaiah Robertson were the team’s top tacklers from a year ago. Stephens will be on the outside and Robertson on the inside. Robert White will be moving from nose guard to defensive end.

“If I could stretch him out, he would be getting all kinds of D-I offers,” Hunter said.

White stands about 5-10 and weighs 290 pounds. He’s worked a lot on his speed, quickness and agility in the off season and will be putting pressure on opposing quarterbacks.

Jay Harper, son of long-time Valley coach Marshon Harper, is a standout in the secondary and has been offered by UAB.

Some dedicated work in the weight room is starting to show results.

“We have six kids who are squatting over 400 pounds,” Hunter said. “That’s a big improvement on where we have been. To play well in football, you have to be good on defense and have the strength to be physical.”

An area of concern is the kicking game. Noah Hunt is expected to do well as the team’s punter. The place kicking duties are wide open right now.

“We’ve been fortunate at Valley High to have had kickers to play for us in four-year cycles,” Hunter said. “We’d have someone really good who would start as a freshman, play for four years and then have another freshman come along. We don’t have that this year.”

Hunter said that his team has had a most productive summer.

“It has been one of the best ones we have had since I have been here,” he said. “The kids have been through lots of practices, and they have a very good attitude. They have been working hard to get better. Our kids have been really getting after it. We are definitely ahead of where we were at this point in past seasons.”

Workouts have started at 7 a.m.

“We start early and get a lot done,” he said. “It’s been a hot summer, and it’s good to get under way when the weather is cooler.”

The team will have an intrasquad scrimmage on Friday and then start preparations for the opening game of the season versus Handley.

Valley has dropped down a classification, but that doesn’t mean the schedule will be easy.

“Someone asked me if there are any games on our schedule we can point to as guaranteed wins, and I told him no way. They will all be tough,” Hunter said. “To win any game, we will have to be ready to play that week.”

It will be easier to make the playoffs than it was in 6A. Valley is in a six-team region. Win two region games and the Rams are virtually guaranteed a spot in post-season play.

“If we can gel as a team and stay healthy, I think we can make some noise this year,” Hunter said.

In putting on his athletic director’s cap, Hunter said he’s pleased Valley will have 13 sports this year. New this year will be wrestling and flag football for girls.

“I’m glad we are bringing wrestling back to Valley High,” Hunter said. “This will give some guys who don’t play basketball something else to do in the winter months. Flag football will be good, too. I like it that we are providing more opportunities to play sports. Kids who aren’t well suited for one type of sport might do well in another one.”

“They have been playing together since they were freshmen, and I expect them to do really well in 5A,” he said. “We are excited about our basketball team. Our baseball team made the playoffs last year in 6A. I expect them to have a good season, and our softball team has come a long way in recent years.”

A member of the club asked Hunter if possible school consolidation would affect athletics.

He said there will be a transitional period when this takes place. Some kids may transfer out and some transfer in.

Hunter experienced consolidation when he was in high school in Tallapoosa County. He’s is originally from New Site and was in school when three small rural highs schools – New Site, Daviston and Hackneyville – consolidated into Horseshoe Bend High.

One factor that could ease the transition is the fact that today’s kids are connected on social media and know each other even thought they attend different schools.

Hunter said he’s hoping Valley can stay at 5A even though Valley and LaFayette may be merging.

“If we have a new school building and possibly a new field house, that might draw some new students to our school,” he said.

Hunter doesn’t like what’s taking place in college football with NIL and the transfer portal.

“It’s ruining the college game,” Hunter said. “We are seeing a transformation taking place in both college football and high school football.”

“If you have finished your ninth grade year and transfer to another school, it has to be a bona fide move, and you have to play your sophomore year on the junior varsity team. You can’t be a varsity player that first year. If you are a JV player in the tenth grade, you can be eligible to play on the varsity at the school the next two years.”

“There’s a problem with these new college rules,” Hunter said. “It’s ruining everything.”