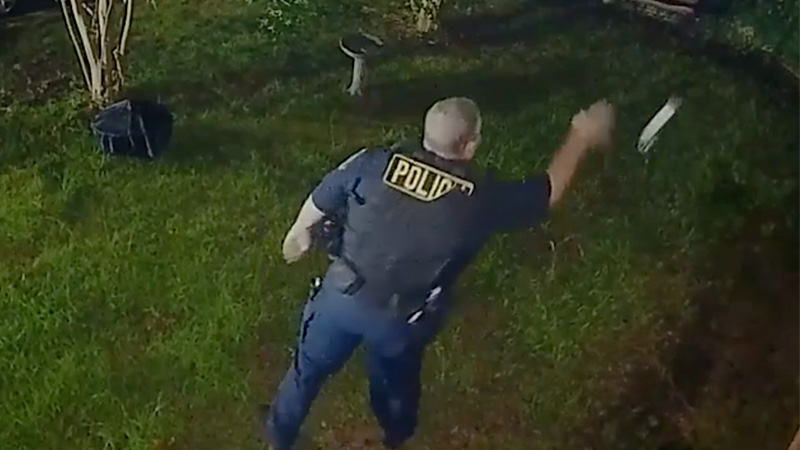 Additional West Point police officers have been placed on administrative leave after a video surfaced of one of them appearing to throw a security camera across a resident’s yard.

“The West Point Police Department is taking this matter very seriously and has since turned the investigation over to the Georgia Bureau of Investigations,” the press release said.

In the video, posted by Tomeshia James Madden, two officers appear to be in a resident’s yard. They are heard talking, though it is hard to make out the audio. A third person is also heard. Then one appears to throw something — which Madden identified as a camera — across the yard and into the bushes.

The camera recording the officers is angled just above them.

“Can someone explain to me why he would do this?” Madden posted.

Madden has since retained attorney Wendell Major, who says they expect West Point police to conduct a fair and impartial investigation.

Major told VTN the officers were serving a warrant on Madden’s son at the time of the incident. According to Major, the son has since turned himself into authorities and they intend to resolve that situation in court. It’s unclear what the warrants were regarding.

As for the video, Major said it is self-explanatory and calls the comments in the video “vile and disgusting.”

“The video is self-explanatory,” Major said in a phone interview with VTN Tuesday. “It depicts some very vile and disgusting comments. But, we will allow the West Point Police Department to do a thorough investigation to determine what’s the appropriate response to such by them. And we will deal with that response.”

Major also said he was just placed on retainer and the details are limited at this time, but he is working to gather as much information as possible from West Point Police Department.

“We’ve got to assess what’s going on,” Major said. “We don’t really have much information, all the information would be in the hands of the West Point Police Department now and we’re going to seek to gather what we can and be informed and be guided by that information.”

Major said as of Tuesday morning he had not heard from the West Point Police Department. The VTN has requested any audio and video recordings from the officers on scene.