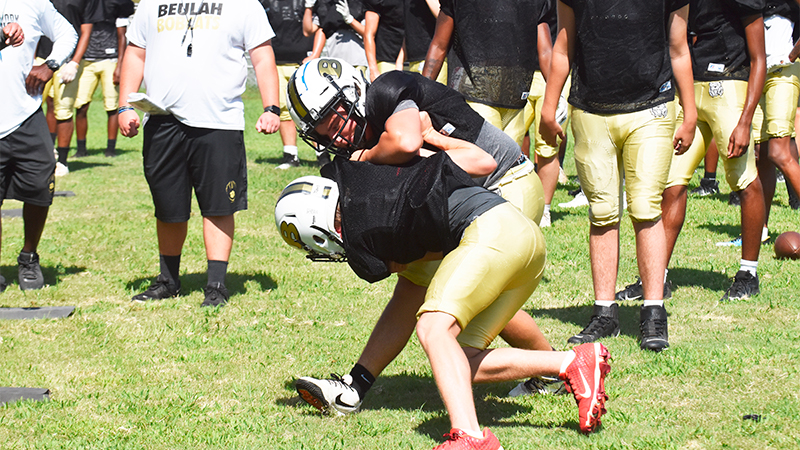 It’s August, which means that football season is finally here. Every school in Alabama is finally allowed to begin their official fall practices, and Beulah began on Monday.

Summer workouts are finally over, and teams are shifting from the weight room to the practice field.

With week zero only two and a half weeks away, football programs are kicking into full gear.

Beulah took part in several padded drills, including the sled. The sled drill is when linemen push against a dummy that’s attached to a sled.

Beulah also did board drills, which is when players line up and block each other trying to push the other one back.

This is all part of head coach Matt Johnson’s plan to be more physical.

“We’re still working on learning the schematics of our defense and being physical and tough this first part of fall camp,” Johnson said. “What we’ve been harping on is learning our defense and just being tough. We need to be more physical. Sometimes in summer with helmets you learn bad habits, so with pads and full gear we can build that toughness.”

One of the challenges Beulah is facing this week is they have players still out of town. Their starting quarterback, Noah Higdon, is on a mission trip, so he will miss some of fall practice. They’re also missing their starting right tackle and tight end.

Johnson is hoping his team will be ready by week zero.

“We still have some things to tidy up,” Johnson said. “We’re still working on our special teams. We just have to be a tough team this year. Some people say we have an easier schedule this year. I don’t see it as an easy schedule. We can compete with these teams now, and that’s just something we have to deal with.”

Beulah will play their first game against Abbeville on Aug. 19 during week zero.

“We’ve started some game prep, but we’re still working on what we do best versus what Abbeville does,”  Johnson said. “We’re starting to work on some things that will help with them and Loachapoka during week one.”

For Johnson, the biggest difference between summer practices and padded practice is the physicality aspect.

“During the summer, you just try to build some conditioning and get them to learn a scheme,” Johnson said. “During the fall, you try to get them to hone it in and become more physical.”