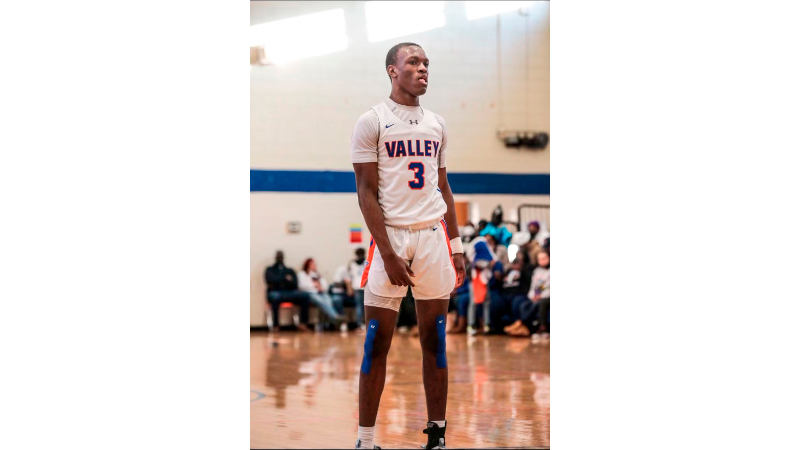 Valley varsity basketball’s leading scorer Brandon Thomas competed in the NCAA Live Period, which is when players can be evaluated by college coaches at AAU tournaments.

Thomas competed with his Valley teammate, Cam Dooley, for the Tri City Elite team in the Southeast Live tournament.

The tournament was held in Atlanta, and Thomas missed the first four games of the tournament. Despite that, Thomas still impressed college coaches. Thomas will be a junior this year, but he will be one of the top players for the Rams.

“I got to play with my teammate, Cam,” Thomas said. “We both did amazing, and we both averaged around 17 points per game and nine rebounds.  We had a teammate from Eufala. We just all did amazing.”

Despite playing with different players and a different team, Thomas didn’t feel like the AAU tournament was that different from playing at Valley.

“I know what Cam can do. He knows what I can do,” Thomas said. “We’re like a dynamic duo.”

As for playing with guys from different schools, Thomas and Dooley were able to work out communication issues fast.
“We had communication problems at first,” Thomas said. “Once we got to the Live Period, it was a smooth road.”

They only had four practices before the tournament, but it was enough time to create chemistry.

As for his college interest, Thomas had several schools look at him. Not all of them were during the live period.

“I have Louisville, Grambling State, Middle Tennessee State and the University of West Florida looking at me,” Thomas said.

He doesn’t have any offers yet, but he is only a Junior.

Valley head coach Marshon Harper is also impressed with what Thomas brings to the table.

“Brandon has been doing a great job this year,” Harper said. “We told him he has to get bigger, faster and stronger. He’s been dedicating himself to the weight room every day. He’s been conditioning and learning how to play offense and defense on another level.”

Thomas is a power forward and center who can use his size to dominate the interior of the court.

“I’m good in the post and getting to the basket,” Thomas said.

As for getting himself noticed by more schools, Thomas has relied on showing out for Valley and letting the coaches come to him.

“I’ve been just trying my best in high school and depending on coach Harper,” Thomas said. “Ever since I’ve been a freshman, he’s been with me. I’ve felt good here playing for him.”

Harper didn’t get to watch Thomas play live at the tournament, but he got to see some film which helped him evaluate Thomas before the season.

“They sent me some footage, and they were doing a great job,” Harper said. “Him and Cam are just two kids who have developed their body and strength. They’ve grown about two or three inches. They can shoot the outside shot, and they can dribble and pass the ball. They’re also great rebounders. Brandon was our leading scorer last year and the leading rebounder the previous year. He also averaged two blocks per game.”

As for preparing for the winter season, Thomas has been putting work with Harper a couple hours a day during the week. Thomas will also travel to Columbus to practice in a gym with his AAU coach, James Harvey.

“Look for big things from Brandon this year,” Harper said.