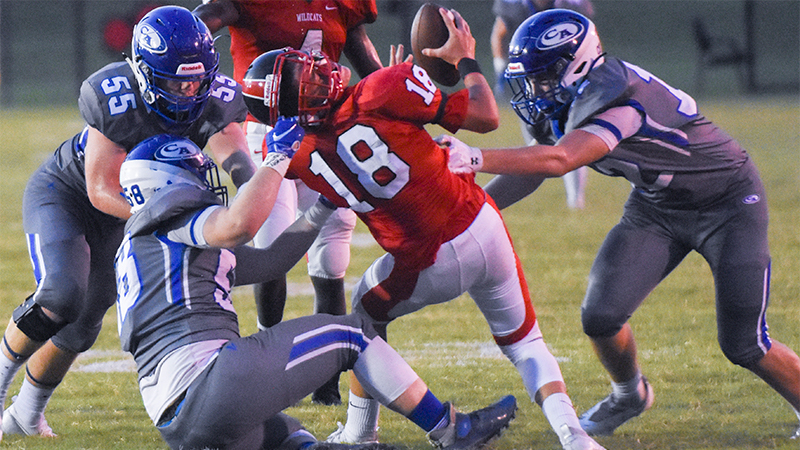 Chambers Academy and Springwood School used to be the private school rivalry of Chambers County.

In recent years, the rivalry has sort of waned due to Springwood dealing with several coaching changes.

Now, the Springwood Wildcats have switched to 8-man football, which means this will be the first time the two teams haven’t played each other since 2005.

Chambers Academy head coach Jason Allen has been a part of the rivalry as a player and a coach.

“It’s a very good rivalry,” Allen said. “I can remember when the games between Springwood and Chambers were standing room only. Both sides really supported their programs well. It was really fun to be a part of.”

Although Chambers has won the last seven games against the Wildcats, Springwood leads the overall series 29-16-1.

“We’ve had some really good attended games with those guys,” Allen said. “Only in the last couple years has the rivalry waned. I remember back in 2017, it was a really good game at their place.”

As a player, Allen remembers the rivalry being an important game each season.

“That was the game you circled, and even if you didn’t have a great year, winning that game made your season,” Allen said. “There was a lot of passion and intensity in that game.”

Springwood is under the leadership of Joey Burch, who is starting his first year as head coach of the Wildcats.

“I haven’t talked to coach Burch, but I’m pulling for Springwood,” Allen said. “Hopefully, they’ll get back to 11-man. I think that’s their plan, but I can’t speak for them. Hopefully, we’ll be able to resume the rivalry.”

Allen knows what it’s like to start coaching a team who hasn’t had a lot of coaching stability in recent years. He took over the Rebel program in 2013, when they came off of a 1-9 season.

“They need some stability like we needed stability when I came back to Chambers,” Allen said. “It’s a huge advantage when you have the same guy there for multiple years and you build some stability within your program. I have no doubt that’s coach Burch’s goal, and I have no doubt he’ll do a good job. I know he’s a really good fellow. I met him last year before he started working at Springwood, and I think he’s a really good guy.”

For Burch, he’s mainly focused on his team in the present. While the rivalry is important to Springwood, Burch wants his team to succeed where they are now in 8-man football.

“I met him [Allen] last summer and when we played them,” Burch said. “We’re just trying to build our program up and have some success here.”

Burch mentioned that he would like to play Chambers if they did go to 11-man football, but he feels like 8-man football will help his team the most right now.

“Our goal is to be successful in this league,” Burch said. “We may look to go back to 11-man in the future, or this may be our sweet spot where we can have success and provide a good football experience for our kids, fans and our community.”

“It seems like it was eons ago,” Allen said. “He had some really good football teams there. I remember in ‘98 he came to our place when we were undefeated, and they ended up upsetting us. I went on and worked for coach Beck when we were at Lee-Scott, so he and I have always had a great relationship.”

Allen hopes the rivalry will return one day so the people of Chambers County can enjoy it once more.

“I hope we can give this gift back to the county so both schools can cheer on their teams and renew the rivalry,” Allen said. “There’s a lot of passionate people in our county.”