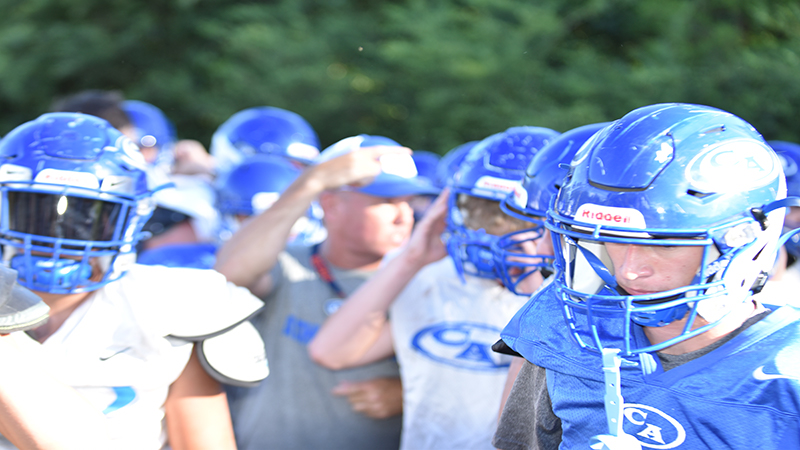 With only a couple weeks until the first game, Chambers Academy has begun fall practice.

While they aren’t able to practice in full pads yet, they can practice in shells, which lets them be a little more physical. They still can’t hit yet, but they can do drills that will more realistically reflect what they do in a game.

Head coach Jason Allen knows his team has a lot they need to get done before they face Lee-Scott, which will be a rivalry and one of the toughest games on their schedule.

Allen isn’t exactly focused on Lee-Scott right now, and he’s more focused on making sure his team is prepared for the season.

“We’re not really focusing on Lee-Scott right now as we are focusing on our schemes,” Allen said. “We’re working on formations and rules of place so they understand the concepts of what we’re trying to do. We’re also working on special teams. You want to have your kids familiar with them when you get to game week. I’ll focus more on our opponent in a week or so.”

One of the biggest challenges Allen is facing is replacing his defensive line from last year.
“We had to replace our whole defensive line, so that’s been a point of emphasis for us,” Allen said. “We just want to make sure we’re good up front because if you’re not good up front then everything behind just follows suit.”

The main difference between fall practice and summer practice is the fact that pads allow you to be more physical. For Allen, it means there’s more urgency.

“There’s a little more urgency,” Allen said. “The kids understand that it’s getting closer. That’s the biggest thing. We’re just more football specific in the fall as to what we’re trying to teach.”

There will be competitions in fall camp, especially at the skill positions, but Allen feels confident in his guys no matter who the starter is.

“We feel good at the quarterback position and our skill positions. We have kids we can win with,” Allen said. “We haven’t narrowed down who will be the starters, but we can win with two sets of groups right now. We’re leaning on the guys up front. They’re the ones who are back and starting.”

With the season quickly approaching, Allen stressed a sense of urgency. He still wants his team to keep their composure through camp.

“You talk to them about staying on track and take it one day at a time,” Allen said. “In that first game, we’ll find out some things about ourselves. We’ll find out about things we did better than we thought we would. These guys know it’s a process. They’re going to naturally be excited. You’ll feel the excitement in the air in that first game.”

Chambers Academy has adopted the slogan “Stay great, be humble” this year, and they’ll look to follow that when they play Lee-Scott on Aug. 18.