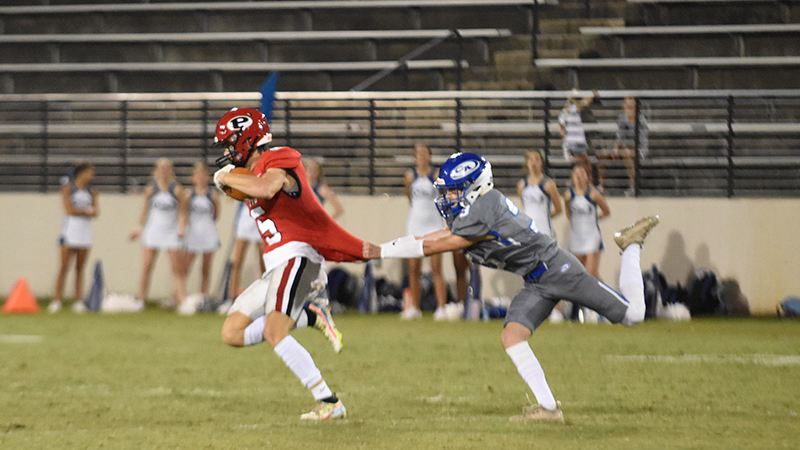 The level of competition was night and day, but Chambers Academy fell to First Presbyterian Day 34-3 in Carrollton, Georgia on Saturday night.

First Presbyterian Day came from Macon, Georgia to play the Rebels in the SECIS competition, which pits some of the best independent schools in Alabama, Georgia, Mississippi and South Carolina against each other.

The first half was a disaster for the Rebels.

Despite having a few drives in opposing territory, they couldn’t get in the end zone.

First Presbyterian Day does have a quarterback in Jakhari Williams, who is ranked a four-star by the 247 composite rankings. Williams had four total touchdowns in the first half, and the Rebels had no answer for him.

The Vikings are one of the best independent schools in Georgia, but the Rebels just couldn’t match their talent.

“Our kids played hard,” Chambers Academy head coach Jason Allen said. “We competed. We hit. We were physical. We gave up some big plays. It’s just the little things. Of course, they have a really good quarterback. I thought we were I coverage ok. We just didn’t get our eyes on the ball. We’ve played two teams so far that have 800 plus students. We have 300. Nobody’s going to feel sorry for us. I don’t feel sorry for us. This is only going to make us better. I think a lot of people will say Chambers is out of the picture and isn’t that good, but I like our team.”

The Rebels were finally able to score in the second half when they drove down the field, and kicker Noah Hand converted his only field goal attempt of the night. They also held the Vikings scoreless in the entire second half, which was played with a running clock.

One thing Allen wants to work on is his team giving up the big plays.

“It’s just basic fundamental things,” Allen said. “If you’re getting beat in coverage, just tackle the guy. Get a pass interference. It’s only 15 yards. We can’t give up 80 yard touchdowns. We have to go back and get that fixed.”

The Rebels were able to move the ball better than in their shutout loss last week, but they still couldn’t get in the end zone.

“It’s little things,” Allen said. “It’s penalties. It’s missed blocks. We’re doing a lot of things right, but everybody has to be doing something right to make things work. We’re not a big play team. We’re a grind it out team. We just have to do a better job of sustaining drives and not shooting ourselves in the foot.”

The Rebels fall to 0-2 on the season, and they’ll open up region play against Edgewood at home next weekend.