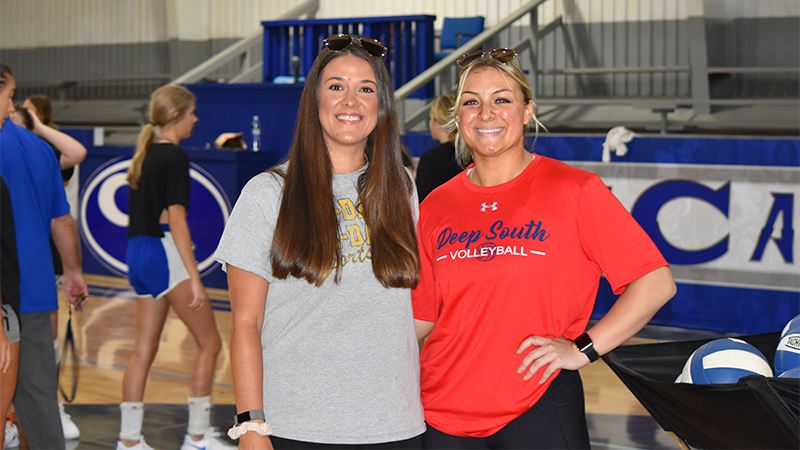 Chambers Academy hired Jessica Patterson to be their new volleyball and softball coach after Morgan Pepper left to take another job.

Patterson was hired this week and assistant coach Madison Harrell will still be a part of the staff.

Patterson is excited to be a part of Chambers Academy, and she comes from a volleyball background.

“I went to high school at Benjamin Russell, and I played at Central Alabama Community College,” Patterson said. “I coached the Dadeville junior high softball team. I haven’t been a head coach, and I’ve never coached volleyball.”

Although Patterson hasn’t coached volleyball before, she’s prepared for the challenge.

“I have one week to learn what we can do and learn the players’ names,” Patterson said. “I told the girls we’re all in a growing period. They lost a bunch of seniors from last year who were strong for the team. They have to grow as well. I have to grow as a coach. We’re just all going to grow together.”

Patterson will also have to deal with a young team while preparing for their preseason jamboree this weekend.

“We’re going to use this weekend to see where we sit,” Patterson said. “We get to come back next week, and we have no games that week. We’ll just finetune the things we need to work on from this weekend.”

One advantage she has is coach Harrell, who has been implementing a system during the summer.

“She’s been there since the beginning, and she’s done a fantastic job,” Patterson said. “I do feel like they will be ready to play, and that’s because of coach Harrell. It’s been easy for me to come in and have the ball already rolling.”

As for what she’s looking forward to, Patterson is just excited to be involved with sports.

“I love volleyball,” Patterson said. “I’ve always been competitive. I’ve always loved the game. I’m just looking forward to showing them the things I’ve learned and watching them grow. I’m most excited to see how far they came at the end of the season.”

Pepper left the program last week, and Chambers has been in contact with Patterson ever since. She also is a parent of Chambers Academy students.

“We’ve been talking for two weeks,” Patterson said. “My kids are new at Chambers this year, and we came in late. They were in a situation where they really needed a coach and someone told them I played. We feel like it was the Lord’s work. It’s not like they were looking for me, and I was looking for them. It just kind of fell into place. We feel like it’s a good fit. I feel like I can build on what they already have.”

Another challenge she’s facing is that she has to earn the trust of these players as the long term coach.

“In the first team meeting, I told them I’m here to coach them, but I’m also here to love them,” Patterson said. “I want to know them outside of volleyball. I’m here to be here for them, and we’re going to learn the game of volleyball in the process.”

She also praised Harrell for making the transition easy.

“I don’t think it would be an easy change had she not been there from day one,” Patterson said. “She’s been great for the girls, and they love her.”

With the preseason jamboree happening Saturday, athletic director Jason Allen was rushing to make a new hire before the season started.

“It’s a unique situation,” Allen said. “You have to be fortunate when you’re dealing with a limited pool of candidates. We found what we were looking for. She has collegiate experience coaching. She’s a mother, so she has maturity. She’s somebody that the girls can depend on.”

Allen had to find a coach who was available with the season starting, and he believes Patterson will be right for the job.

“She has the persona we’re looking for to lead our ladies,” Allen said. “She wants to win. She’s not afraid of hard work. She won’t be a full-time employee at Chambers Academy, but she’ll lead our program.”

The rebels will play their first regular season game Aug. 22 against Coosa Valley.