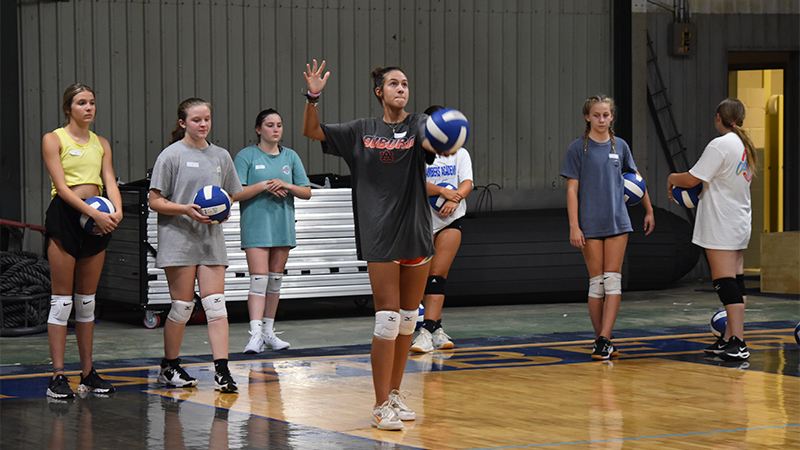 The Chambers Academy volleyball team competed in a preseason jamboree at Macon East on Saturday.

This gave first year head coach Jessica Patterson a chance to fully evaluate her team in action since she just took over as the head coach less than a month ago.

“We told the girls we were going to use this jamboree to see where we sit,” Patterson said. “We got beat every game, but the positive thing from that is we get to come back and work on the things we took from there. Communication is number one. I took responsibility on my part as well. They were nervous. I was nervous. The first game didn’t go well. I was proud of them because we came back after the first game and made some adjustments. The next game, they looked better and didn’t look as nervous.”

The Rebels played a total of three matches. The first two matches were round robin games with only one set. They played an elimination game, which was a best of three set match.

One challenge Chambers is facing is the youth of the team.

“To have a young team, I think we hung in there,” Patterson said. “I think we’re going to have a great season. I was proud of the girls. I was most proud that each game looked better and better. They listened and made adjustments. All you can ask for is coachable children. I love this team. They want to work. They want to practice.”

One of the biggest challenges for Patterson was she was coaching her first game ever as a head coach.

“I went in there, and I wasn’t quite sure what to do, but I had a fantastic referee,” Patterson said. “I had one that showed me what to do at the beginning of the game. He made the transition into doing my first game so easy. Once I got through my first game, I feel so comfortable now. There’s always those things you’re not sure about. I’ve always played the game but never had to do the behind the scenes stuff. It makes me hopeful for the rest of the season.”

Patterson also has to find a way to keep the team’s spirit up despite the disappointing results.

“When we got done with the whole thing, they were defeated,” Patterson said. “I don’t want them to think that didn’t mean anything, but it doesn’t mean what they’re thinking it means. What happened this weekend is something good. It’s kind of a scrimmage for everybody. You can really just focus on taking it back with you and correcting the things we saw. I could not be more proud of them.”

Patterson was also proud of her team’s work ethic.

Patterson will work with assistant coach Madison Harrell this week to make sure the girls improve their communication.
“We’re going to make sure we’re as loud as we can be in the gym,” Patterson said.

The Rebels will have all of this week to practice before they face Coosa Valley in their season opener on Aug. 22.