City of Lanett backs Day of Prayer set for Friday 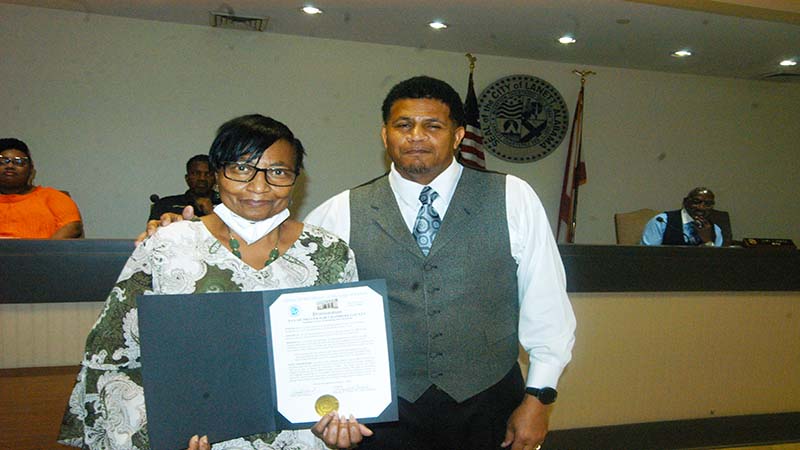 LANETT — The Lanett City Council on Monday approved a mayor’s proclamation recognizing Friday, August 5th as the annual Chambers County Day of Prayer and called on residents of the city and throughout Chambers County to support this special occasion. Council Member Ronnie Tucker read aloud the proclamation and presented a copy of it to Day of Prayer organizer Diane Perry.

“We humbly acknowledge our dependence upon God for wisdom, courage and power and upon the spiritual and moral support of all people of Chambers County,” the proclamation reads, “and in so doing, we urge the support of all people in praying for their leaders, thus enabling them to direct and serve to the best of their abilities.”

Perry thanked the mayor and council for their support. The cities of Lanett, Valley and LaFayette and the Chambers County Commission each year extend their supp0rt for the event and encourage local citizens to take part in a Day of Prayer. It annually takes place just off the Courthouse grounds in downtown LaFayette on the first Friday evening in August. It starts at 6 p.m. CDT (7 Eastern).

“Our first Day of Prayer took place on September 6, 2001,” Perry said. “Everybody in the country was praying five days later on Tuesday, September 11th.”

That was the day of the infamous 9-11 attacks that killed over 3,000 people in New York City, the Pentagon and in Pennsylvania.

All of the al-Qaida terrorist leaders who had major roles in planning the September 11th attacks are now either dead or in prison. The one who evaded justice the longest, Ayman al-Zawahiri, was killed in a U.S. drone strike over the weekend in Afghanistan. He is said to have been standing alone on a balcony in a prosperous part of the capital city of Kabul when he was killed by two Hellfire missiles that had taken dead aim on him.

While Osama bin Laden was always seen as the face of al-Qaida, al-Zawahiri was seen as its hate-filled heart. Even before 9-11 he and bin Laden had conspired to kill hundreds of people in terrorist acts of embassy bombings and the 2000 attack on the USS Cole.

The Chambers County Day of Prayer and the 9-11 attacks have a link in history.

“We need to keep our people in prayer,” Perry said. “We thank you for your support, and we thank the other governments in Chambers County for supporting what we are doing.”