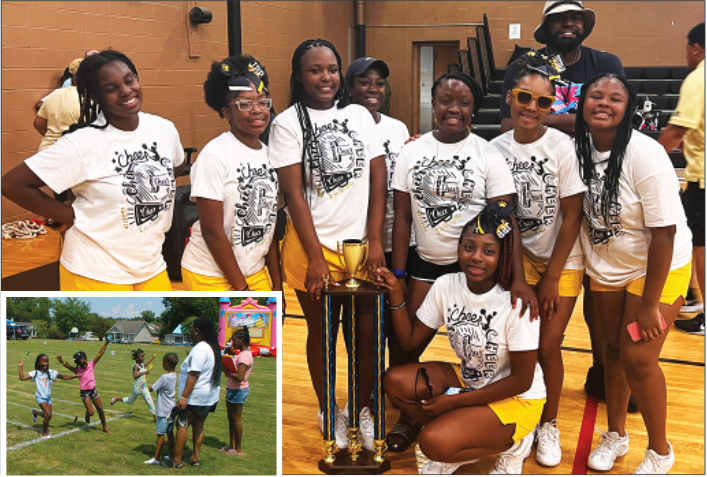 Saturday’s thunderstorms couldn’t disrupt the second annual Back-to-school bash, which was held by the city of Lanett.

The bash took place at the W.O. Lance Elementary School playground before the weather forced the high school portion into the James A. Hardy Gymnasium at the Lanett Rec Center.

Lanett Parks and Recreation Director Trent McCants was in charge of the bash, but he also received a lot of help from the community.

“It went way better than expected,” McCants said. “All the schools came together. It wasn’t just a one-man show. We had a lot of people that pitched in.”

As for moving the high school portion of the bash to the gym, it was Valley cheerleader Caitlyn Clark’s idea to move from the playground.

“Last year, when the rain came through, we had to end it,” McCants said. “This year, the rain was coming again. I said we should all get in our cars and wait 45 minutes. Caitlyn walked up to me and said, ‘We’re not going to end it this year. Let’s take it to the gym.’ That’s what we did.”

Valley, Lanett, LaFayette and Springwood all sent students and coaches to the bash.

The students piled into the gym, and all the cheerleaders from each school came together to pep up the crowd. Valley’s band stood at one end of the gym and played while the Rams mascot hyped up the students.

After the students settled down, Mayor Jamie Heard led the gym in a prayer, and then the event started. The first event was a hot wing eating contest with the cheerleaders. The first person to eat 10 hot wings was declared the winner of the event. LaFayette cheerleader D’karia Burton won the first point for the Bulldogs.

Springwood’s Brayden Moseley won the first point for the Wildcats.

“They weren’t that hot,” Moseley said.

After the players, the coaches took on the wing challenge. LaFayette basketball and volleyball coach Chase Lewis gave LaFayette the lead.

After the hot wing contest, the schools competed in a free throw challenge. A coach, cheerleader and player from each school all had one chance to miss a free throw. Every contestant missed except for Valley’s cheerleader. Valley basketball coach Marshon Harper and key player Cam Dooley both missed their free throws.

“We made one shot. That’s all you need,” Harper said.

After the free throw challenge, each school competed in a sack race. Valley won its second point in the competition.

The TikTok dance challenge involved only the cheerleaders, but Lanett won when a couple of their football players started doing backflips.

The bash finished with the tug of war event, which the cheerleaders took part in. LaFayette solidified their victory, and they won the entire bash.

“This was fun. It’s all about bringing the communities together,” Lewis said. “I’m happy to be here myself. At the end of the day, I represent all programs at LaFayette. Anything considering LaFayette High School, I’ll be there front and center. Whether this is our last year or whether we have 100 years to go, I’m excited for these kids. We have an amazing group of kids at LaFayette High School.”

Lewis’ favorite part of the bash was winning the hot wing contest.

“I love wings. I knew I was going to win it, and I got free food,” Lewis said.

McCants gifted them with a trophy, then all the students left. As they were leaving, students were able to grab free school supplies.

McCants had to cancel some of the events like the football throwing contest due to the rain. Despite all that, it was a rousing success for him.

“It was a blur. Everything was going so fast,” McCants said. “I really loved the tug of war and the hot wings contest.”

As for next year’s bash, McCants hopes the Troup County schools will join them next year.