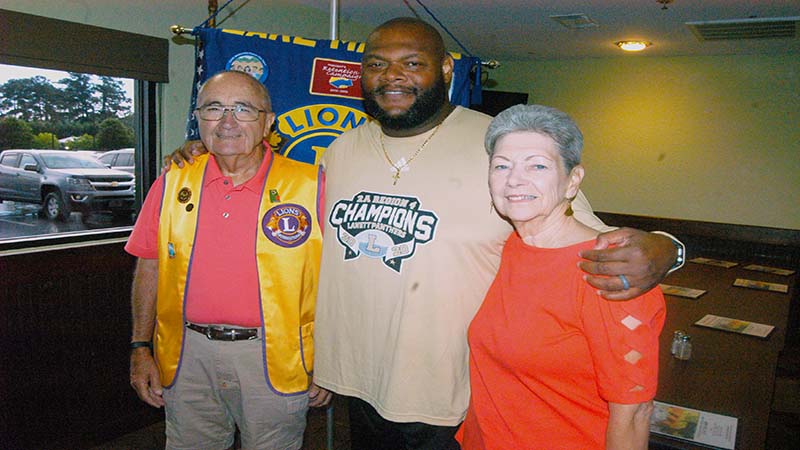 LANETT — With a major reroofing project and a new field house being built, the campus of Lanett High has been a busy work zone this summer, but all that work will be worthwhile when the new school year is underway.

Located on the southwest corner of the school within easy walking distance to Morgan-Washburn Stadium, the field house was gutted by fire in February 2021. The coaches’ offices, the weight room, and athletes’ lockers were lost in the blaze. A complete rebuild was in order. There were delays in getting an insurance settlement, but once the work was underway, it has proceeded on pace for the most part. The new field house was hoped to be ready for the start of this year’s football season. That has been delayed for several weeks, but it could be open by the middle of September.

“I thought I was going to lose my mind on the day of the fire,” Story said. “We had to do some shifting around to get through the next year. Valley Baptist Church helped us in a big way by providing space for a weight room. They even left us some snacks and Gatorade in a refrigerator for us.”

It may have been a rough road to get there, but the new field house will be a significant upgrade over the old one. “Everything has been revamped and will be brand new,” Story said. “We will have new offices, a new weight room, new lockers, new showers and separate sides for the boys and girls teams. I am glad we were able to do this. Batson-Cook (the project contractor) has been great to work with. They have been doing great work.”

Story is entering his 14th year as Lanett High football coach. He won his 100th game at the school this past year and is on the way to becoming the winningest coach in school history. His oldest son, Trey was a star quarterback for the Panthers. He is nearing a degree in engineering from Tuskegee University and has his choice of job offers. Younger son Kristian will play a lot in the Alabama secondary this fall, and youngest son Caden is a freshman at Clemson.

What he’s proudest of in his 14-year tenure at Lanett High is that more than 90 football, basketball and track athletes have gotten college scholarships. Lanett High has won seven state championships in those three sports over the past decade. Three of those state titles have been in boys basketball, two in football and two in boys track.

“If you play for Lanett High, we can find you a place to go to college,” Story said.

The Panthers will be in a new region this year. They have been shifted from a region where most schools are north of Lanett. The new region will have more schools to the south. LaFayette and Horseshoe Bend are holdovers from the old region. New members include Highland Home, Luverne, Reeltown and Barbour County.

Three of those schools, Highland Home, Luverne and Reeltown, have strong football programs.

“We will have our hands full in region play this year,” Story said. “We will be going up against some really good teams.”

Story said that any one of the four region teams that make the playoffs could win the state championship.

“We have been blessed with the kind of athletes we have had in my 14 years here,” he said. “It’s phenomenal to have had more than 90 of them sign college scholarships.”

Story said he worked on many little things when he started as the LHS coach. He would sometimes leave paper on the floor in the classroom and in the hallways to see how fast students would pick it up and dispose of it properly.

He’s one of those people who believes that cleanliness is next to godliness.

“They have to be good at taking care of the little things first before they start mastering the big things,” he said.