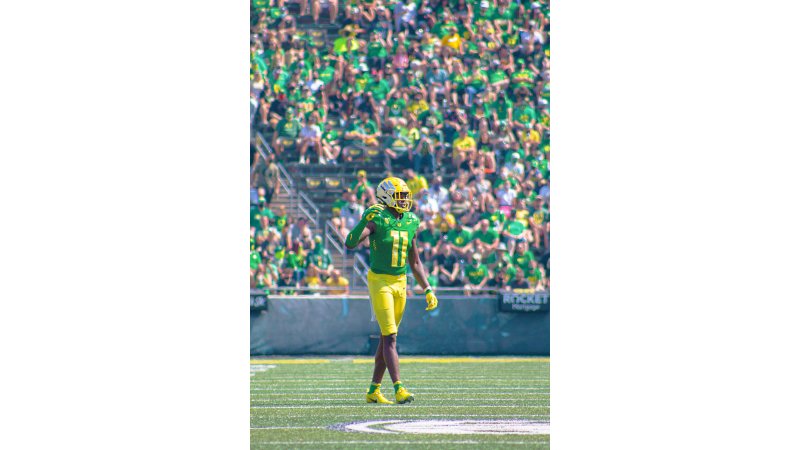 A familiar name will come to Mercedes Benz Stadium on Saturday, Sept. 3, when the Oregon Ducks travel across the country to take on the Georgia Bulldogs in the Chick-Fil-A Kickoff Game.

Former Lanett Panther Trikweze Bridges will take the field in a game he says he is excited about for many reasons. Bridges is ready to showcase the talents that made him Alabama’s 15th-ranked recruit in 2018 against the defending College Football Playoff National Champions.

“To play the previous year’s national champion team, and [it’s] their first game and our first game, you can’t ask for a better opportunity than that,” Bridges said. “And by being an SEC school where they say [it] is the best conference and you know, everybody has their own opinions about the SEC and the PAC-12, that’s another great opportunity, and just to display my talent going against people in a different conference is exciting.”

The main reason for Bridges’ excitement is his family.

“That’s like one of the dreams come true, a big wish, just playing in front of my family, you know, come close to home,” Bridges said. “I always wanted my family to come see me play and just being in Atlanta and the Mercedes Benz Stadium, you can’t ask for a better opportunity than that.”

MOVING FROM SAFETY TO CORNER AND BACK TO SAFETY

Bridges entered Oregon as a safety, was converted to corner and will now move back to his natural position of safety. Many have projected him to get the starting nod at boundary safety (BS) alongside Bryan Addison at free safety (FS).

The switch to corner his freshman year was a challenge for Bridges, but one he learned a lot from.

“The great thing about me is I am versatile,” Bridges said. “I can play anywhere on the field. My freshman year, fall camp, they moved [me] to corner and that transition, it was a challenge for me. So the past season, I kind of like formed into an actual cornerback. So, toward the end of last season, Coach Cristobal’s staff started putting me at safety and my game was all natural, so I know I can still do this.”

Moving back to safety, Bridges says he feels more comfortable and has some high expectations for this season, including bringing home the Jim Thorpe Award for the best defensive back in the nation and hauling in at least five interceptions.

“I say five [interceptions], but I feel like I’m holding myself back, I know I can get more, but five is the minimum,” Bridges said.

Bridges saw playing time in all 14 Oregon’s games in the 2021-22 campaign at cornerback, starting in three. He recorded a career-high 26 total tackles and 17 solo tackles while adding two pass breakups, forced and hauled in his first interception against Oklahoma St.

PLAYING UNDER A NEW COACHING STAFF

The Ducks will play under former Georgia defensive coordinator and first-time head coach Dan Lanning, something Bridges is also optimistic about. Bridges says the time between former coach Mario Critsobal’s departure and Lanning’s announcement was a bit uneasy because of the uncertainty and the length of time the coaching search took. Once the announcement was made, he said it was easy to understand why the search took as long as it did.

“When coach Cristobal left, it took us a minute to find a coach. So, it was kind of confusing, frustrating,” Bridges said. “It was worth the wait.”

When endorsement deals became the new norm on July 1, 2019, no one knew how much of an impact it would have on the college football landscape. Several prominent Oregon donors, including Pat Kilkenny, The Papé Family, Jim Morse, Ed Maletis, and NIKE co-founder Phil Knight saw an opportunity: To pool decades of combined experience in branding, marketing, sponsorship and creative and use it to empower Oregon student-athletes to elevate their NIL opportunities while allowing them to focus on school and their sport called Division Street.

“We’ve put together an extremely capable group to deal with the fast-changing landscape of NIL,” Nike CEO Phil Knight said on the Division Street website. “Led by Rosemary [St. Clair, Division Street’s CEO and Former VP/GM of Nike Women] and Rudy Chapa, Division Street Chairman of the Board and former Nike VP of Sports Marketing, I’m confident we will bring innovation and creativity to this new world.”

Bridges said he has taken advantage of these opportunities but does not have any specific deals in place. He knows those deals will come, but for now, Bridges is focused heavily on his performance on the field and let the deals fall in as they may.

“I know if I do what I need to do, and during the season, NIL deals will come, so I’m not I’m not rushing NIL deals,” Bridges said. “Some people like get lost in NIL deals, like, [it’s] all about the money, but forget what will get you the money. I’m handling what I can handle, focused on what I need to do and if NIL deals come, they come. I’m focusing on me.”

If the 2-deep roster predictions hold true, on Sept. 3, look out for number 11 in green and yellow on defense.