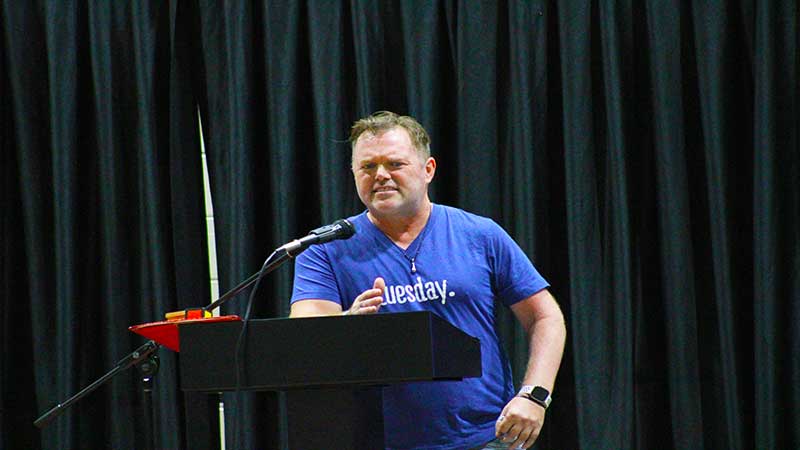 The Chambers County School District hosted its annual back-to-school teacher seminar and training conference, known as Institute, this Tuesday at the Valley Sportsplex Gymnasium. The conference featured several teacher recognitions, updates from the superintendent and a keynote speaker.

Sheila Jones, Director of Curriculum and Instruction for K-8, took time to recognize the teachers who worked during the summer reading program. As a reward for their efforts, any teacher who worked the summer program for 13 or more days received a free personal day.

“We have had several [teachers] who went out there that were willing to give up their time this summer to help our students to improve their reading scores,” Jones said. “Thank you for all of your hard work.”

Following the recognitions, Jones brought forward all of the CCSD principals and shared an interesting fact about each of them.

“Oftentimes in our workplaces, we really don’t take a lot of time to get to know each other. And so there may be some things that you are not aware of about the principal of your school,” Jones said. “What I am going to do is lay down the red carpet and have them come across as I share something about each of them.”

The excerpts of each principal varied vastly from principal to principal, and often had a humorous twist to them. It was shared that Tyler Nelson, principal of Inspire Academy, was well versed in doing impersonations, with his two best being Kermit the Frog and Richard Nixon.

The keynote speaker for the event was comedian and motivational speaker Derrick Tennant. Tennant was a promising athlete throughout high school and dreamed of becoming a professional athlete, however, he unexpectedly went through what doctors would later term as random bleeding from point x for an unknown reason. Paralyzed and in a coma, Tennant underwent brain surgery that left him paralyzed on his left side. With his athletic career over, Tennant shifted his focus to helping others who faced seemingly insurmountable trials through comedy, magic, and inspirational speaking.

During his speech, Tenant credited his success and growth to one to the love he received from his family, friends, mentor and faith. He encouraged the teachers to continue to spread love to their students and to push them to success, even when they felt as though the odds were against them. He also encouraged teachers to look at their jobs and their students with a positive outlook, what he deemed as the “right side of things.”