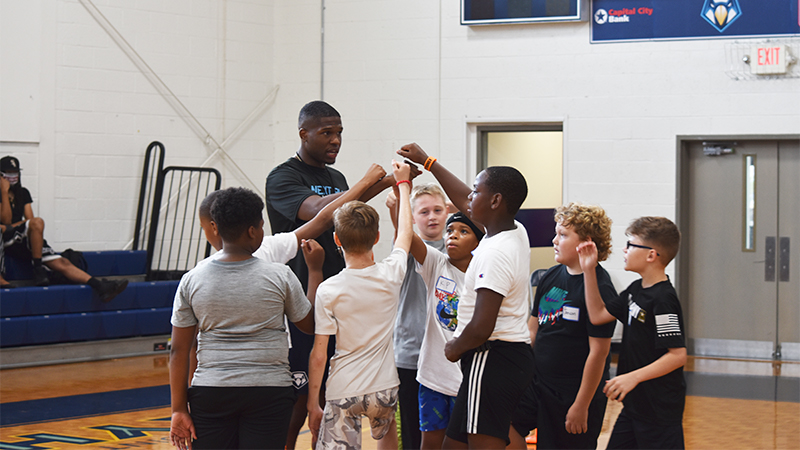 The camp was for children ages seven through 11. The camp wasn’t associated with the university.

The purpose of the camp was to help kids learn basketball and character while giving them the opportunity to receive free backpacks.

There were over 30 kids at the free camp, and this is just the start for Tory and Nicci and their NextPlay program.

“Day one of the camp was great,” Tory said. “I thought the kids got better. They had fun. We were able to talk about character. Nicci did a phenomenal job of speaking with the kids on achieving goals and having high character. We had a blast.”

The kids spent Monday learning character from the staff while they spent Tuesday going through different stations and learning the fundamentals of basketball.

“We’re doing a lot of contest stuff,” Tory said. “The kids are learning dribbling, shooting, how to use their weak hand, one-on-one stuff and basic stuff like that.”

Wooley hopes these kids will walk away with more than just knowledge of basketball.

“We want them to know this is a safe place,” Tory said. “We want them to work on listening to their parents, their teachers and their coaches. We know they’re about to enter a structured environment, and our goal is to just provide them with a safe place for these kids to come learn and grow.”

Tory and Nicci came up with this camp because of Tory’s mentorship program.

The Wooley’s are being helped out by several people, including other coaches at Point.

“We have a lot of great workers and coaches that help us,” Tory said. “We couldn’t do it without them.”

The Wooleys are using the principles of A.B.C. to teach the kids.

“We gave them a simple back-to-school lesson,” Nicci said. “A is for attitude and just having a positive attitude on life no matter what situation may come your way. B stands for balance. Steph Curry was the MVP of the finals and the All-Star Game, but no one mentioned he earned his college degree this year. C is for character and that will propel you to be successful in life. We try to make it fun and simple for them.”

One of the parents at the event, Mallory Mitchell, is hoping her kid will learn something from the camp.

“We found out about this on Facebook,” Mitchell said. “I want my kid to learn teamwork. This has been very good for the community, and we look forward to doing it again next year.”

The Wooleys are planning on holding several mentorship events throughout the school year.