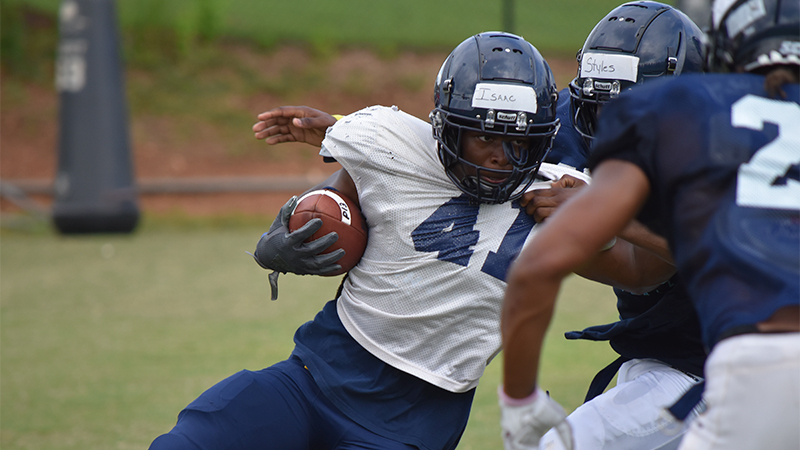 Point’s football team held its first scrimmage of the fall on Wednesday at the Valley Sportsplex. The scrimmage was a chance for head coach Trevor Zeiders to see his team in action, although the Skyhawks were playing against themselves.

The morning started out with some drills, and then the team spent about an hour scrimmaging.

They rotated three quarterbacks, and the offense was able to score three touchdowns, which pleased Zeiders.

“I was very pleased that the offense was able to score three times,” Zeiders said.

Zeiders had some mixed thoughts about his team overall.

“I saw a lot of good and bad on both sides of the ball,” Zeiders said. “I saw a lot of things we have to get cleaned up. I wasn’t very pleased with the fact we only had one takeaway, but at the same time that’s a good and bad deal. That means the offense is protecting it, but the defense isn’t getting the opportunity to take it away enough.”

Offensively, Zeiders was pleased with the return of receiver Emery Bryant.

“He was a playmaker. He made a couple big ones,” Zeiders said. “You’re starting to see the guys who are making plays. The quarterbacks had some really nice plays, they just didn’t get as much help as I would’ve liked to have seen on the outside. We need to continue developing the offensive line. Our running backs made a couple nice runs.”

Defensively, Zeiders was pleased, but he still wanted to see more from his players.

“We saw a couple guys step up that we weren’t completely aware of,” Zeiders said. “They’re young, but they’re starting to make some plays. Gabe Donnelly is a young freshman, and he’s doing some nice stuff.”

Zeiders isn’t sure what they need to improve on from the scrimmage yet as he has to watch film with his team.

“There’s going to be an emphasis on takeaways in regards to the defense,” Zeiders said. “The offense just needs to move the chains. We need to be better picking up four or five yards on first down to put us in manageable situations.”

Zeiders still isn’t sure which quarterback will start, but he was pleased with all of his quarterbacks.

“Brenton [White] moved the ball. Mitch [Gossett] moved the ball,” Zeiders said. “Some of it just depends on who they’re playing with. If you have six on the field with you as the quarterback, you’re in a little better shape than a couple of the other guys.”

“We need some of those receivers to step up and make plays outside of one or two guys,” Zeiders said.

Point didn’t use any special teams plays during their scrimmage, but they’ll incorporate them next week. Overall, the scrimmage went well for Zeiders.

Some of the freshmen hadn’t seen contact since the fall. As for the little things, Zeiders just wants to work on a few technique issues.

“It’s going to be things like positioning and taking proper steps here and there,” Zeiders said. “We need to know where to align to not give things away. We have some alignments where we’re telling the offense we’re coming on a blitz when we want to be showing something else.”

Point will hold its next scrimmage on Saturday and is about a third of the way through fall practice. Point will release its depth chart next week and will play its first game at Cumberland on Aug. 27.