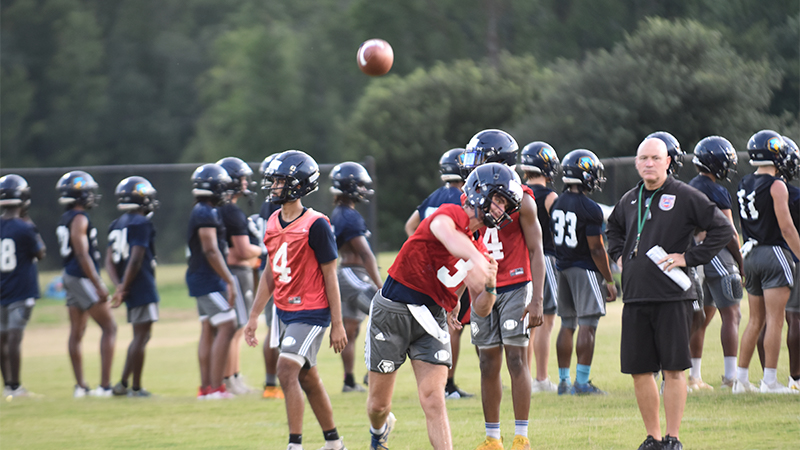 Point’s football team has been picked fifth out of six teams in the preseason Appalachian Athletic Conference coaches poll.

The teams were ranked by the six head coaches in the conference, including Point head coach Trevor Zeiders.

Point received 14 points in the poll, which was two ahead of St. Andrews. They were also three points behind Union. Reinhardt received the most votes with five first place votes.

Bluefield was ranked second, and it received the only other first place vote.

Point didn’t play in the AAC last year, but it played almost all the same teams while in the Mid-South conference.

“The Appalachian division existed in the Mid-South Conference last year,” Zeiders said. “This is our first year actually playing in the AAC. We split off and formed our own conference.”

This was Zeiders’ first time voting for these teams in a poll, and he felt like it was unfair to vote for his own team. As for being picked fifth, Zeiders felt like the ranking was fair.

“On one hand, I understand. We haven’t done anything to show otherwise right now,” Zeiders said. “We lost to a couple teams head-to-head. We were lucky to get by both Union and St. Andrews. I understand why everyone is being picked ahead of us right now.”

“Strictly because of the fact I wasn’t voting for us, I would’ve voted us third,” Zeiders said. “I didn’t because I didn’t want to vote for myself. I wanted to see where everybody else was.”

Besides the AAC standings, the NAIA will put out a top 25 poll each week. Zeiders feels like his team has a good chance of cracking the top-25.

“If we have the season I expect us to have, I think we’ll be in the top 25 at the end of the year,” Zeiders said. “We’re not going to start there with an offense ranked 95th out of 98.”

This year, Point won’t be playing any big schools, which they call money games. Scheduling conflicts were the main culprit.

“We looked for a money game, but it didn’t match up,” Zeiders said. “On one hand, you don’t have a game that you’ll make money off of that will be a challenge for your guys. On the other hand, we’re not going to potentially take a morale killing loss. It can be demoralizing if you lose badly enough.”

Zeiders feels like his team needs a strong start if they are going to get into the top-25 this year.

“We feel like it’s important to start strong,” Zeiders said. “The quicker we come out of the gate, that’s what will sell everything else to these kids. If they start seeing early success, I think the team will experience sustained success. If we don’t have quick success, there will be more growing pains. It’s all about the buy in and how preparation goes.”