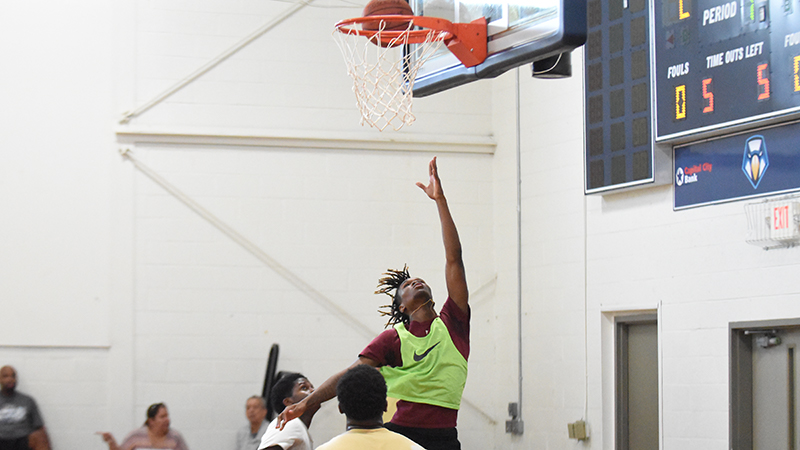 Point University held an elite basketball camp for 30 high school players and prospects on Sunday at the Point Gymnasium.

The camp was not only a chance for the players to showcase their talents, it was a way for Point to evaluate players from all around the area.

Thirty players came from several schools from Georgia and Alabama, and some came all the way from the Atlanta area.

The players competed in several drills, including five-on-five competitions, for an hour and a half. During the last half hour, the prospects were given the opportunity to ask questions to the Point coaches and men’s basketball players.

Point Assistant Coach Sae’Quahn Rogers helped out with the camp along with all the other Point coaches and players.

“We saw a bunch of guys over the summer, and we just went around and got some top guys who could fit our level and felt good about,” Rogers said. “We’re a Christian institution, so we wanted guys who not only could fit us athletically but fit us who we are as a school. After talking to the guys, we made a list of 30 guys and worked hard to get them there.”

Rogers wanted to be able to evaluate how good of a fit these 30 prospects would be for their program.

“We want a better look at them in a competitive space,” Rogers said. “It was also a chance for them to see our court and see how we do things as well.”

Of all the local players, Rogers was most impressed with Valley’s Jamarious Martin.

“We thought he was really quick and shifty,” Rogers said.

Although Point used this camp to evaluate players, they’re still a long way off from giving out offers to any 2023 players.

“That’s down the road,” Rogers said. “Right now, we’re just trying to get to know players and have them get to know us. That will take some time. We wanted to get them down to campus and meet our guys.”

As for the next steps, the coaches will make their way to high school games when the season starts.

“We’ll watch them play a high school game and have them work out with our guys,” Rogers said. “We want to watch them closely.”

Rogers wanted the players to learn more about the recruiting process and college basketball.

“I wanted them to get little nuggets,” Rogers said. “They learned different things they can take with them to high school and throughout life.”