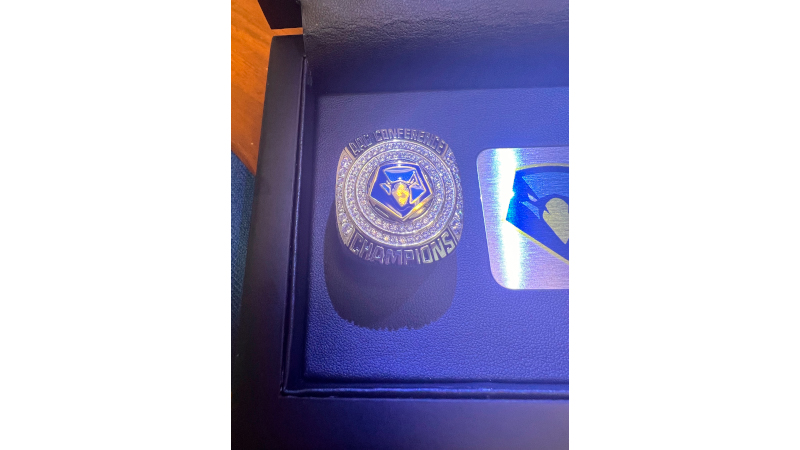 This was the first year in program history Point won a conference championship.

Point defeated Tennessee Wesleyan University in a penalty shootout during the Appalachian Athletic Conference finals. This was after Point was down 2-0 at halftime.

Head Coach Mark Wozniak was proud of his team for coming back and winning the championship.

“We came into the season feeling confident we could do well,” Wozniak said. “Halfway through the year, we realized we could make some noise.”

Wozniak mentioned beating Milligan during the season was a huge confidence booster for the team.

Point beat their rival, Reinhardt, in the first round of the playoffs. They beat Montreat 1-0 in the semifinals to advance to the conference finals.

“We could’ve easily been disappointed and frustrated when we were down, but the guys were very motivated to win,” Wozniak said. “We were very confident that we had the mentality and the strength to win. We never felt like we were out of it because of the experience and knowing that we can come back and win games.”

Wozniak described how his team came back to win the championship.

“We tied it up and went to penalty kicks, and those are stressful,” Wozniak said. “The guys who took them stepped up. All five went in. The guys rushed the field, and we had a lot of fans that traveled. It was a cool experience to have them run on the field and celebrate with us. I don’t think I realized how special it was until we started getting phone calls and emails from different people at the school.”

Wozniak explained what he told his team at halftime of the championship game.

“I felt like we were playing well, but we just had a couple unfortunate breaks in the game,” Wozniak said. “We’ve been in this situation. No matter what happens, these are the games you remember. I tried to encourage them because they had 45 minutes left to prove to themselves they’re a good team.”

Wozniak was able to encourage his team to make a comeback, and they were able to advance to the NAIA tournament.

“We went to Columbia, Missouri and faced a tough Columbia team,” Wozniak said. “We lost in the first round. It was a really good experience to see the next level of teams. Now our goal is to go back again and not lose the first game.”

Even though they lost in the first round, Wozniak is proud of his team. He also wants to carry the momentum of a conference title into next season.

“We’re trying to bring in players who are as good or better than players who graduated, and that’s difficult,” Wozniak said. “We have a good core of returners. We can use that momentum as an opportunity to remind the new players they can do it. Repeating a championship is hard. If we want to do it, we have to get better. We can’t be satisfied with what we did last year. That only counts for last year.”