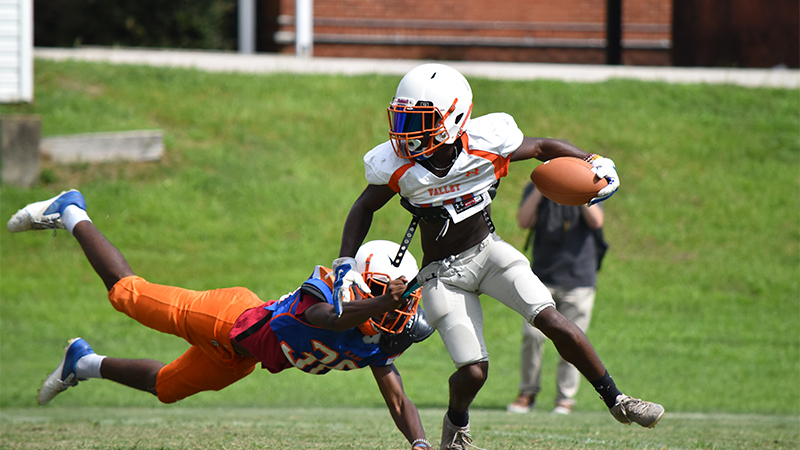 The Valley Rams held a practice Friday where they prepared for their upcoming challenge against Handley on Aug. 19.

Valley may have dropped down to 5A, but they still have a difficult schedule.

Valley worked on some situational drills involving players from the first team on varsity all the way to junior varsity.

They worked through some down and distance drills as well as practicing special teams.

The Rams finished their practice with some goal line work.

Head coach Adam Hunter believed his team will be ready for Handley next week, but his players still have some things they need to work on.

Hunter has been stressing physicality all season, and that’s one of the things he wants to work on, especially on defense.

“We need to have 11 guys who do their responsibility every play to make things happen,” Hunter said.

Despite some issues with fatigue at practice, Hunter did see some good from his team.

“There were some bright spots too,” Hunter said. “I thought Cam ran the offense very well today. He took control and made some plays on some crucial situations. He made some throws, and he used his legs a lot. Defensively, we got them off the field on crucial plays like third and short. We had guys step up when it’s that time. We need to win first and ten on both sides of the ball.”

With their first game only a week away, Hunter knows he has to prepare his guys for a tough road matchup with Handley.

“We’ll be ready,” Hunter said. “We’re still working on getting guys in playing shape. It’s just going to depend on how they respond on Friday night. We’re fixing to play a really good Handley team. When those lights come on, we’ll really get after it.”

“We put them in situations to see what they’ll do when their backs are against the wall,” Hunter said. “We went one-on-one on offense and defense. We want to see what our guys do against each other.”

Another area Valley is working on is special teams.

“We’ve got some questions with kickoff and field goals,” Hunter said. “Our kicker wasn’t here today. He had a family emergency, so that’s going to be one of the key areas that’s going to be tough for us. We need consistency, but we’re working on it, and it’s getting better as we go.”

The Rams will play Handley next weekend on the road then turn around and play Lanett the next week.