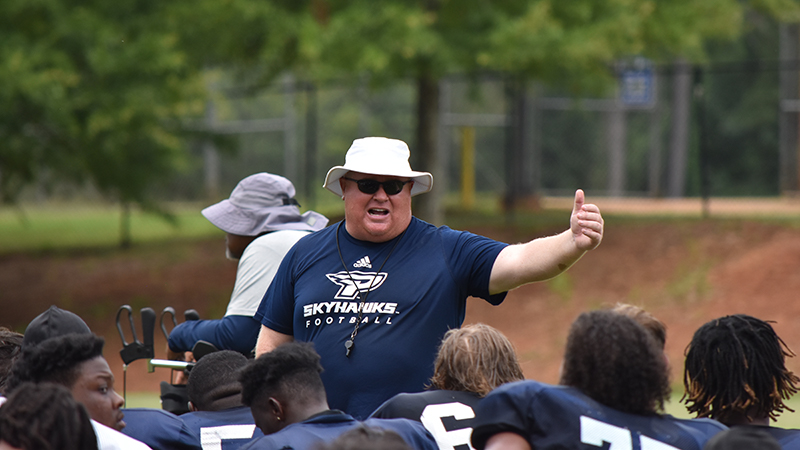 As Point University’s football program enters a new era under head coach Trevor Zeiders, the Skyhawks will travel to Lebanon, Tennessee on Saturday to face Cumberland in their season opener.

The Skyhawks are coming off of a rough year where they finished 2-9.

Luckily, for the Skyhawks, they don’t open the season against a bigger team like Mercer, who they lost to 69-0 in the season opener last year.

Cumberland is coming off of a 3-7 season where they also got off to a rough start.

Cumberland may have had a similar season to Point last year, but Zeiders knows they’ll be a big challenge.

“Defensively, they get after you,” Zeiders said. “They’re aggressive. They blitz a decent amount. On the offensive side of the ball, they run some option principle type of stuff, so you have to be sound in what you’re doing. You have to be ready to handle their pass game as well.”

For Zeiders, a strong start is important to set the pace for the rest of the season.

“This is a good chance for us to get off on the right foot and get off to a great start,” Zeiders said. “It’s important from a momentum standpoint. We’re seeing a lot of buy in, and if they have success with the current level of buy in, the level of success is just going to go up. The more they believe, the better off we’re all going to be.”

The Skyhawks will rely on the arm of sophomore Payton Allen to lead them through the season. Allen had a difficult freshman year, but the Skyhawks believe he’s the best option for the team to win.

“We felt like he gives us the best overall chance right now,” Zeiders said. “He moved the ball the best during camp. He made the checks needed. He’s progressed very well. Greg [Forest] being the new offensive coordinator has really helped his progression.”

Allen will start over senior Brenton White and sophomore Mitchell Gossett. Allen is a scrambling quarterback who can use his legs to extend plays.

Allen will get a lot of help with receiver Emery Bryant returning to the program.

“Emery is a gamechanger,” Zeiders said. “He’s one of those guys who can turn a simple five yard pass into a 75 yard touchdown. When you have that threat on the field, that adds an extra dimension to your offense.”

Bryant transferred over from Kentucky State, but he started his college career at Point.

The starting running back for Point will be senior Adam Sanders, but senior Sensir Carnes will also carry some of the load.

Sanders had 295 rushing yards and three touchdowns last season, but Carnes was the Skyhawks’ leading rusher with 364 yards and two touchdowns. Carnes also had one receiving touchdown last season.

New offensive coordinator Greg Forest will have a challenge on his hands to fix an offense that was close to last in the nation last season, but Zeiders feels like he has a good handle of the offense.

“He’s done a phenomenal job,” Zeiders said. “I’m very excited to see where we’re at offensively. I’ve seen a lot of improvement out of them in fall camp. They’ve made strides. They’ve made plays when needed. I expect them to do nothing less than that on Saturday.”

The Skyhawks will play Cumberland at 7 p.m. EST on Saturday.