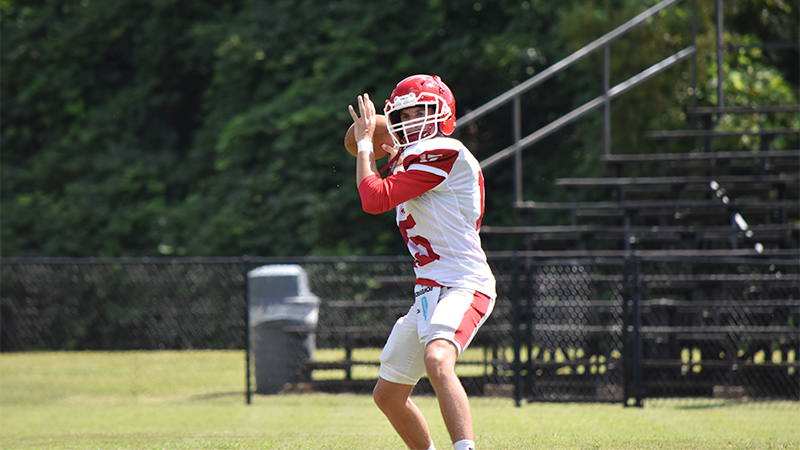 Springwood has officially begun its new era of football with the start of official fall practice.

Despite playing 8-man football, its practices will look more or less the same as 11-man practices.

Although they’re beginning a new season with a new coach and a whole new league, head coach Joey Burch feels good about his team right now. One issue he’s facing is the raging Alabama heat.

“We have to get in football shape, and it’s kind of hard to know how to push the kids with the heat and humidity,” Burch said. “We’ve been watching them and giving them a lot of fluids. We’ve been working on small details of things we were able to put in over the summer. We’ve had a good start to practice this week, and we’re really excited about our opportunities.”

“We’re going to run a balanced offense, so we’re focusing on running good routes,” Burch said. “One of the biggest things we’re focusing on is the offensive line. That’s going to be a key part. We’ve got some good sized guys who are returning starters. Coach [Hunter] Plant has been working with them on some of the fine points of it like footwork and hand placement.”

Burch is excited about 8-man football because his players will get to see the field a lot.

“One of the things we’re excited about with a few number of players is they get tons of reps,” Burch said. “We’re able to get hundreds of reps in just an hour and a half or two hour practice. The kids are really picking up on things because they’re getting so many reps.”

One area Burch feels good about is his offensive line.

“Our offensive line has to be a strong point for us,” Burch said. “They’re catching on to the plays we’re running. They’re excited about the season, and they’re working really hard.”

The biggest change for fall practice from summer is the players can now hit each other.

“We went two or three days in shorts and got conditioned,” Burch said. “Today, we put on pads and did a little bit of hitting. We were pleased with the effort the kids gave.”

As for the players, they’re getting adjusted to the preparation for padded practice.

“They’re putting the equipment on and getting used to the heat of that,” Burch said. “Some of our kids haven’t taken care of themselves. They’ve been out in the heat all day long. They didn’t fluid up. They didn’t eat, and that’s going to affect them.”

The international players are finally back on campus, and they’re getting well adjusted to the team.

“I’ve talked to all of them, and a lot of them are from Vietnam and South Korea. They talk about how the humidity and temperature there is very similar to what it is here,” Burch said. “We kept tabs on them all summer. They all came in in pretty good shape. They were tired early in the week from the jetlag.”

One of the international guys Burch is excited about is Francesco Lim, who will be a running back and linebacker.

“He started at linebacker and was one of our leading tacklers,” Burch said. “He’s a solidly built kid. He’s a very good soccer player, so that kind of translates well. He’s going to hopefully be a leader on our defense. He’s one of our standout international kids.”

Another player Burch is excited about is Linus Wanninger, who is from Germany.

“He played last year, and he just kind of learned the game last year,” Burch said. “He worked real hard in the weight room over the summer. He’s put on about 15 pounds of muscle. He’ll also step up and play some linebacker as well.”

Some of the other international players are just learning the game.

“We had one today who’s brand new to football,” Burch said. “He got his first experience of being able to tackle. He hopped up and said, ‘That didn’t hurt at all.’ It’s great having those guys out and teaching them the game.”

Burch is excited about the new era of Springwood football.

“We’re excited about being in this 8-man league. We feel like we can be successful in that,” Burch said. “We put a lot of work in here. We had our open house, and we had one of the biggest turnouts we’ve ever had. People are appreciating not only our athletics, but the upgrades we’re making in our school and our community to give these kids a quality education and a quality experience with athletics.”

He also feels like his team is far more prepared this fall than they were at this time last year.

“It’s a world of difference,” Burch said. “Some of the kids are even saying that the commitment level and expectations have been raised. The knowledge level has increased because of the work we’ve been able to do this summer. A lot of times last year, we were still putting things in and trying to figure out what we wanted to do at this point in time.”

Springwood will play its first game against Southern Prep on Aug. 25.