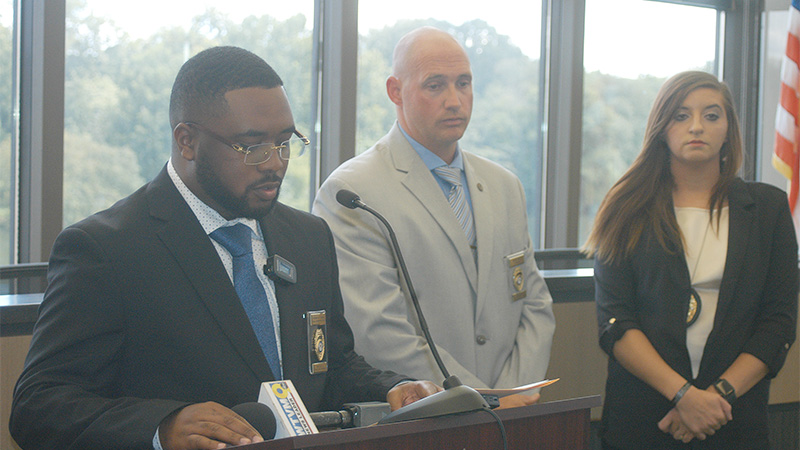 Two West Point Police Department officers — Donald Bramblett and Elizabeth Wegeinka — have been fired following an investigation into an incident where Bramblett was shown throwing a security camera across a resident’s yard while serving a warrant.

Three others are back on the force after being placed on administrative leave while an investigation was completed by the West Point Police Department and Georgia Bureau of Investigation.

Bramblett, the officer identified as throwing the security camera, was fired because his actions were “outside the scope of authority by discarding personal property” without just cause, according to Public Information Officer Cedarious Thomas.

Officer Elizabeth Wegeinka was not aware of Bramblett’s actions and fully complied with the investigation, but she was terminated “for reasons unrelated to this internal investigation,” Thomas said.

The entire incident actually dates all the way back to Aug. 3, when WPPD officers responded to a possible armed robbery in progress at Circle K. Five men were at a pump and two were entering the store, with one being armed.

Upon officer arrival, all but one of the suspects fled the scene in multiple directions, according to Thomas.

Officers pursued all of the individuals and took three of the four at-large suspects into custody. The remaining individual was identified as 17-year-old Justin Vance Hines.

Hines ran on foot to his residence located at 405 Hill Lane, according to the West Point fire chief, who happened to be in the area and saw him go inside. When officers asked Hines’ mother, Tomeshia James, for permission to search the house for her son, she told them they’d need a search warrant to enter her home.

At that time, Thomas said the decision was made to leave the scene because all officers from the department, including Chief Donald Britt, were on scene and the city was uncovered.

Officers knew Hines’ identity and proceeded to take out warrants against him for the offenses of the incident, which were possession of marijuana with the intent to distribute (felony), theft by receiving stolen firearm (felony) and obstructing or hindering law enforcement officers (misdemeanor).

In the two days that followed, Thomas said the criminal investigations division worked to sort out the incident and the applicable warrants. A search warrant was drafted and signed on Saturday, Aug. 6 for 405 Hill Lane. The search warrant was for Hines and any firearms he was in possession of, according to Thomas.

He said WPPD decided to deliver the warrant on Aug. 7 at 5 a.m. due to the need for resources and the likelihood of a safe service due to time of day. There were a total of six patrol officers scheduled to be there at shift change at that time, as well as the investigator on the case.

Thomas said Bramblett is seen and heard on the video entering the front yard of the home at 405 Hill Lane. However, it was unclear what was said on the video. Witness testimony indicated that no officer heard him say a racial slur.

“Due to witness statements, witnesses that had firsthand knowledge said that they heard no racial slur and the video was inconclusive,” said Captain Kevin Carter.

Once Bramblett removed the security camera from the railing and threw it across the yard, O’Steen, Wegienka and Bramblett then made the decision to leave the scene without executing the search warrant, according to Thomas. No debriefing was conducted by any officer on the scene.

The next day, Aug. 8, Tomeshia James came to the WPPD to file a formal complaint. The chief of police at that time, Donald Britt, was out of office on vacation and Carter, the internal affairs investigator, was out of office having a medical procedure done. Britt has since taken another job and had announced those intentions before this incident.

“On the date and time of the submission of the complaint, there was no one at the office to process the complaint,” Thomas said. “Captain Carter was scheduled to return to the office the following day. However, prior to any investigation, the video clip was posted to Facebook by the complainant.”