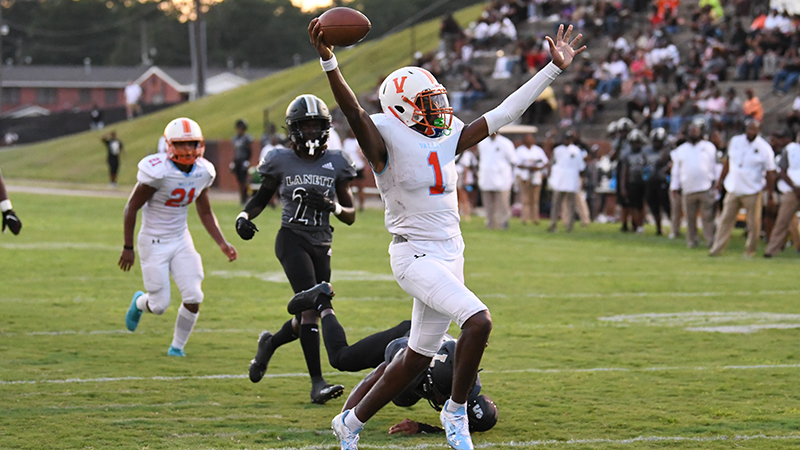 The Valley Rams shutout the Lanett Panthers on Friday at Morgan-Washburn Stadium.

This was the first time the Panthers have been shut out in seven years.

The Rams dominating defense was the main reason their team pulled out the victory.

“They made plays when we needed them to. We were pretty aggressive. I was most impressed by our run defense.”

Despite shutting out the Panthers, Hunter feels like his offense still needs to improve.

“Cam made some big plays when he needed to,” Hunter said.

“We just need more consistency offensively. We just shoot ourselves in the foot. We fumbled the football because we ran the wrong play. We need to clean that stuff up if we’re going to be successful in this 5A region. We need to sustain drives.”

The Valley defense was responsible for four forced turnovers in the game.

The first half was all Valley as the Rams put together a couple offensive drives while barely allowing Lanett to move the ball.

Valley quarterback Cam Dooley was responsible for two touchdowns in the first half.

Dooley’s first touchdown was rushing, and his second touchdown was a pass to Jamarious Martin on fourth down in the second quarter.

The Rams punting woes were nowhere to be seen in the first half, but they missed two extra points.

Valley’s Zan Woody had one first half interception while Lanett’s Keondae Hughley had the other.

The Rams continued to dominate the second half as they forced three turnovers on the Panthers.

For Lanett head coach Clifford Story, he feels like his team needs to do better on the offensive line.

“There’s a lot we need to work on,” Story said.

“Our offensive line is really young. We got outplayed tonight. Valley was more physical. We just need to get better. It was a learning experience. We’re going to have some growing pains, but Valley is a 5A program. We’re going into region next week, so we’re going to clean things up and prepare for region play.”

Another thing Story wants to work on is his quarterback’s decision making. Although Jarrious Goodman was under pressure for a lot of the game, Story thinks he should have done better.

“He did horrible tonight because some of the stuff could’ve been eliminated,” Story said.

Despite the shutout, Story was pleased with his defense’s effort.

“I was very pleased, but we still have to clean up some things there,” Story said.

“They scored some touchdowns because of some misalignment things, but we’re going to be fine.”

Although there was no rain, the second half was a game of back and forth turnovers.

Valley’s I’Zaya Robinson recovered a fumble in the third quarter to keep Lanett out of the end zone.

Later in the third, Cam Dooley fumbled, and Lanett’s Cameron Sutton recovered it.

In the fourth quarter, the Panthers turned the ball over twice as they struggled to score.

Cam Dooley had two rushing touchdowns and one passing touchdown, but he also had one fumble.

The game was sloppy offensively as there were six total turnovers. The Panthers did all they could to stop the Rams on defense, but a 2A school in Lanett can only do so much against a 5A team like Valley.

The Lanett Panthers dropped to 1-1 on the season and will open region play with a road game against Horseshoe Bend next weekend.

Valley improved to 1-1 and will open region play against Beauregard at home next weekend.