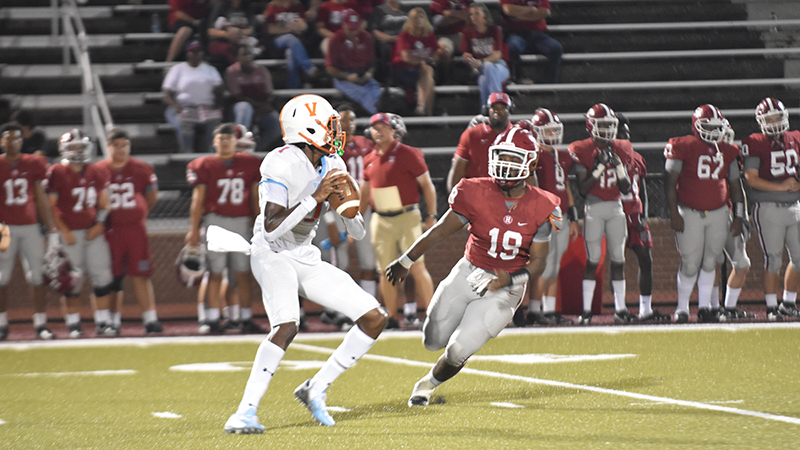 The Valley Rams lost their first game of the season 22-20 at Handley on Friday night at Wright Field.

The Tigers were helped by a couple special teams blunders from Valley.

Handley got off to a hot start after Valley had two high snaps on their first two punts.

“We harped on it. We worked on it all summer, and our punt team let us down. We’ve got to do better than that and get that figured out real quick. Our kids played hard and hats off to Handley.”

Handley’s first two drives started in Ram territory and resulted in 12 early points for the Tigers.

Despite the performance by Handley’s running back, Hunter was pleased with his defense.

“I don’t think they had that many yards rushing in the first half. We came back and gave ourselves a chance, but we’ve got to be smarter. We made some first game mistakes. We’ve got to clean that up.”

The Valley Rams struggled to get going offensively early on, but a deep pass from Cam Dooley to Chase Childs late in the second quarter made it a one score game.

The Rams were able to capitalize on Handley’s next drive by forcing several penalties, making it a 2nd -and-31 at one point in the drive. The Tigers were able to stretch the drive out, but they ultimately came up empty thanks to several key tackles by Dooley.

The Rams took their first lead of the game when Jay Harper returned a punt for a touchdown to give Valley a 13-12 lead.

Handley took back the lead on a field goal, and they started to create some separation.

Haynes recorded his third rushing touchdown of the night to put the Tigers up 22-13.

It wasn’t long before the Rams mounted a drive that was led by Cam Dooley to make the game closer.

Valley closed the lead with a touchdown pass from Dooley to Kendall Parker in the fourth quarter to make it 22-20.

The Rams stopped Handley and got the ball back with less than a minute left.

Despite a promising drive, Dooley threw an interception at the end of the game to seal it.

Valley will take on the Lanett Panthers next week at Morgan-Washburn Stadium.