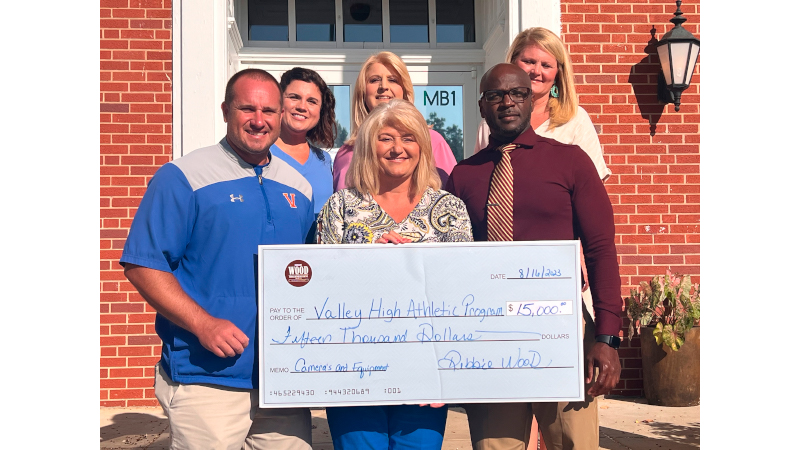 Valley High School received a grant for its football program on Tuesday.

The grant was $15,000, which will go toward things like end zone cameras and other equipment.

“Debbie Wood reached out to us and donated the money to our program,” Hunter said. “She wants to see it grow, so that’s a great thing. We’re going to get a new end zone camera system and then some new football equipment for both the varsity and JV teams.”

Hunter detailed how much each of those were going to cost.

“The end zone camera system is about $6,000,” Hunter said. “We have plenty of needs as far as sleds and stuff for middle school.”

These upgrades will complement the new lighting system at Ram Stadium.
“The kids are excited. Hopefully, the community gets excited about it,” Hunter said.
Debbie Wood wants to invest in football programs around Chambers County.

“I received a request from a booster parent who said they were in desperate need of cameras,” Wood said. “A lot of times cameras not only help them see what players are doing incorrectly, it keeps them safe. If they’re not positioning their body the right way, it’s hard to train an athlete. They need to be able to record and help train their athletes.”

Wood used part of the grant money she received to donate to Valley. She’ll use that money to award grants to other football programs as well.

“I want to concentrate this year on athletic programs,” Wood said. “It’s getting harder in small communities to get help from the community because we’re in the midst of inflation. The needs were greater there. I just gave money to Smith Station last year. This year, I’m concentrating on Beulah, Valley, Lanett and Smiths Station.”

LaFayette High School won’t receive a grant due to consolidation. Beulah and Lanett will both receive their grants soon.