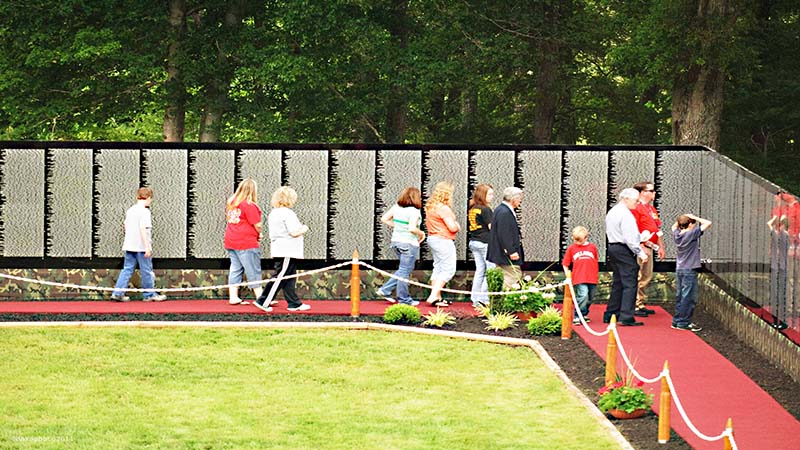 PINE MOUNTAIN – The Vietnam Moving Wall will be coming to Pine Mountain on Thursday, Sept. 15 through Monday, Sept. 19. It is sponsored by the Kings Gap Chapter of the National Society of Daughters of the American Revolution.

First displayed in 1984, the Vietnam Moving Wall is a half-sized replica of the Memorial Wall in Washington DC that was created by John Devitt and several other veteran volunteers. The wall was created following the dedication of the DC memorial in 1982. Inspired by the awe and power of the memorial, Devitt wanted to share that experience with those who did not have the opportunity to go to Washington. Since its inception, the moving wall has toured through every state and has been seen by millions.

Gay Solomon, member of Kings Gap Chapter of the National Society of Daughters of the American Revolution and chairman for the event, said that bringing the wall to Pine Mountain was part of a longer campaign to honor the upcoming 50th year anniversary of the end of the Vietnam War. She noted that her organization had partnered with the Federal Vietnam War Commemoration organization to host six ceremonial events over the course of three years. So far, the organization had held one event, where they honored approximately 35 Vietnam War veterans.

“When our committee started to plan these upcoming ceremonies, we thought it would be a great idea to incorporate the wall for one of them,” Solomon said.

Solomon said that a big reason for the commemoration ceremonies was to make amends to veterans who were mistreated during the war.

“Veterans who served during the Vietnam war were really mistreated, so these events are part of a larger effort to begin to make up for those mistreatments,” Solomon said. “Each of the veterans will be recognized and will receive a lapel pin, a certificate from the State of Georgia and a certificate for the Society of Daughters of the American Revolution.”

Also remembered at these events are the family members of Vietnam veterans who have passed as well as veterans who went missing or were prisoners of war.

“We want to not only commemorate the sacrifices made by veterans who served in the Vietnam War but also the sacrifices of their families. Everyone is welcome,” Solomon said.

For those who are interested in attending or those who serve in the armed forces between November 1955 and May 1974 who would like to be recognized, contact Solomon at (770) 900-5579. The event will be held in person at 132 McDougald Ave in Pine Mountain.