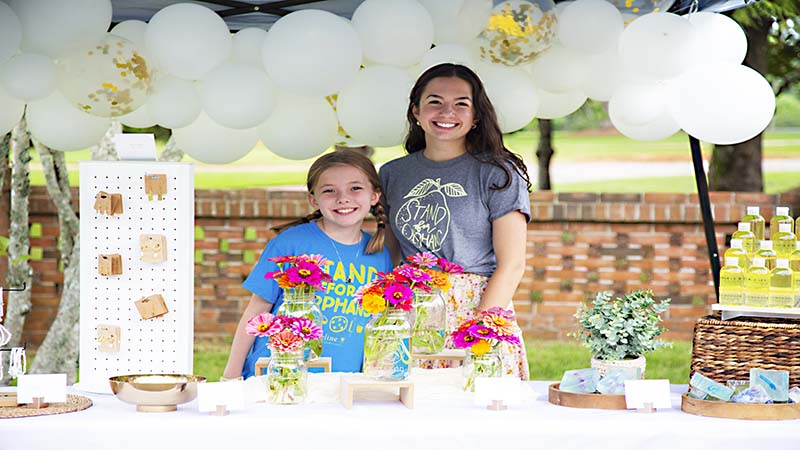 Established in 1981, Lifeline Children Services is a faith-based non-profit organization with the primary goal of assisting families with both domestic and international adoptions. According to their website, Lifeline “provides a hope and a future through the gospel for vulnerable children around the world by discipling, engaging and equipping the Body of Christ toward adoption, foster care, orphan care and support.”

In 2014, the organization worked with children who wanted to make a difference in the lives of others to create the Stand For Orphans campaign. The initiative is run by kids across the country, and all of the funds go to help support Lifeline’s adoption program. Since its inception, over $400,000 have been raised through the Stand For Orphans Campaign.

Brown got involved with the Stand For Orphans Campaign in 2015 following the international adoption of her cousin, Hannah Hugley, from China. Through that process, Brown became very aware of the global orphan crisis and wanted to find some way to help.

“I asked my aunt and uncle if there was any way that I could help them, and they said that I should try and help families who may not have been as fortunate as them,” Brown said. “My uncle told me about Stand For Orphans, and I knew that it would be a perfect way for me to get involved.”

Brown hosted her first stand in 2015 and has hosted a stand every year since, even through the challenges of the pandemic. Her stands have featured a number of goods available to purchase, including lemonade, baked goods, jewelry, shirts and candles. Brown noted that while she was unable to host an in-person stand in 2020, she still was able to raise funds through a virtual stand.

“The pandemic was really challenging for us,because we were not able to have our normal in-person stand. I did not want to not do anything, so we ended up setting up an online stand where people buy things and make purchases. It ended up doing really well,” Brown said.

Since starting the program in 2015, Brown has been able to raise more than $26,000 for orphan care. Brown attributes much of her success with the Stand For Orphans initiative to her faith.

“My faith as a Christian has really helped to motivate me throughout all of my stands,” Brown said. “A big part of being a Christian is spreading love and helping others, and my stands give me the opportunity to do that.”

When asked to give some words of advice to other kids looking to get involved with Stand For Orphans, Brown encouraged them to just get started.

“The most important thing is to just get started. The first step is always a little scary, but people are always willing to help out,” Brown said. “Also, remember to use social media; it can be a really good resource when you are trying to raise awareness about your stand.”

After graduation, Brown plans on attending Samford University to further pursue an education in marketing and non-profit work.