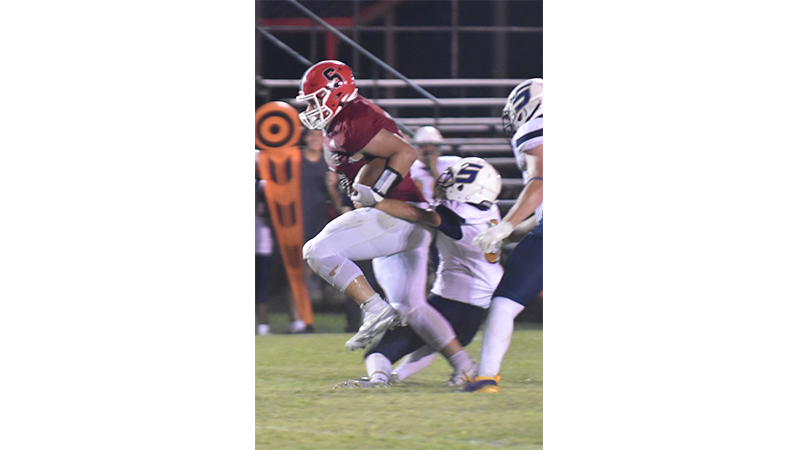 The Springwood Wildcats dominated the Southern Prep on both sides of the ball to win 40-0 on Thursday. Springwood head coach Joey Burch also earned his first win.

“We didn’t really know what to expect,” Burch said. “We knew that we had a pretty good football team. The same team beat us 40-16 last year. We turned the tables and did the same to them. I’m proud of the kids. Man, they deserve this.”

The Wildcats got off to a hot start when they held Southern Prep to a turnover on downs on their first drive.

With good field position, Springwood running back Jonathan Johnson ran the ball into the end zone to give the Wildcats a 6-0 lead. Johnson scored on the two-point conversion to make it 8-0 in the first quarter.

The two teams went back and forth until Wildcat quarterback Ben Cooper threw a touchdown pass to Eli Johnson to give Springwood a two score lead. Johnson ran in the two-point conversion to make it 16-0 going into halftime.

Neither team had a turnover in the first half.

The Wildcats came out screaming in the third quarter when Cayden Cook took a Ben Cooper 60 yards to the house to give Springwood a 24-0 lead.

From then on, the Wildcats didn’t slow down as they added two more rushing touchdowns.

Colt Pearson ran in the last touchdown for Springwood, and he sealed the game with an interception on the next drive.

Anthony Keefer also had an interception.

Burch credited the entire school with the win.

“It starts with leadership with Kim Bayless at the helm,” Burch said. “The booster club. The kids bought in. My assistant coaches did a great job not only during the summer but tonight with making adjustments. I’m just proud of these kids.”

He was also pleased with his team’s defensive effort.

“Our defense got after it,” Burch said. “We had a shutout, so that was great. Coach [Hunter] Plant made a good adjustment as far as blocking. We haven’t seen that in a long time.”

Springwood will travel to Montgomery to play Evangel next weekend.