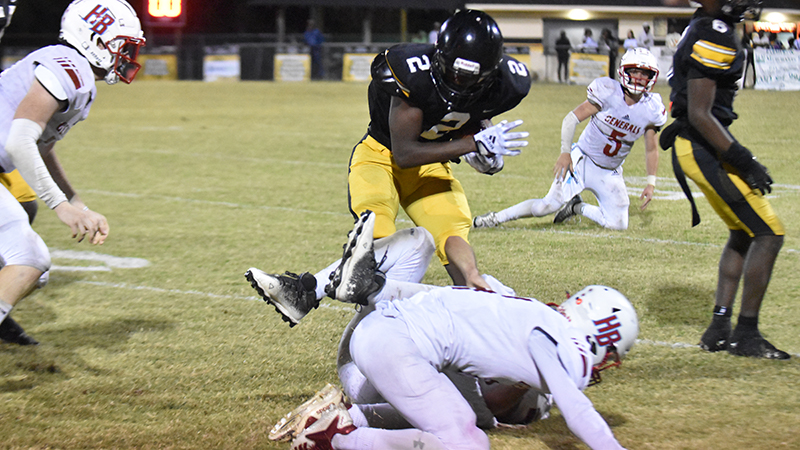 The LaFayette Bulldogs came away with a much needed 26-8 win over the Horseshoe Bend Generals at Bulldog Stadium on Friday night.

Several alumni showed up to support the Bulldogs for what could be their final ever homecoming, and LaFayette’s defense pleased the crowd.

The game started a little rough for the Bulldogs as they threw an interception on the second play of the game.

Despite the turnover, LaFayette’s defense stood tall as they were more physical than the Generals.

The Bulldogs mounted a great second offensive drive that ended in a Zae Towles touchdown pass to Joshua Combs to give LaFayette the 6-0 lead.

The Bulldogs made several more defensive stops in the red zone, despite having a few offsides penalties.

The Bulldogs extended the lead in the second quarter when Zae Towles threw his second touchdown pass, this time to Jaquarious Williams.

The Bulldogs made a statement in the third quarter when they faked a punt inside their own five yard line, and Joshua Combs ran it all the way to the house to make it a 20-0 lead. LaFayette head coach Juan Williams took a chance with that call.

“When you’re 1-4, you have to turn something around,” Williams said.

“That ended up working. You just have to throw the chips. Our guys have been on the other side of it. We had two weeks of good practice, so we feel like we did some good things. Thank the Lord for that.”

Williams was pleased with his team’s defensive performance.

“We just have to grow,” Williams said.

“We got a win, so I’m happy about that. We just have to keep pulling. We have a big game next week against Lanett, but we have the same record. We’ll see where it takes us. We only gave up eight points, so kudos to or defense. They had some stops at the goal line, and I’m really proud of them for stepping up. We needed that for a momentum shift.”

The Bulldogs are now 2-4, and they’ll shift their focus to their rivalry game against Lanett next week for the Panthers’ homecoming.

“We have to work on our attitude,” Williams said.

The Bulldogs now sit at 2-4 in the region, and they could be facing elimination next week at Lanett.

LaFayette and Lanett are both fighting with Goshen to take the fourth spot in the playoffs, but the Bulldogs already lost to the Eagles this year.