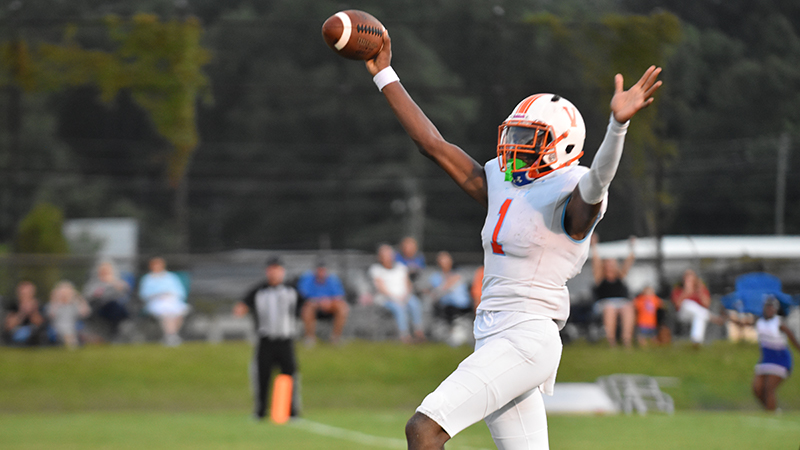 Valley quarterback Cam Dooley won week two’s Athlete of the Week award after leading the Rams’ offense to a 19-0 victory over the Lanett Panthers.

Dooley finished 9-of-15 for 93 yards with one touchdown and an interception. He also had 12 carries for 94 yards and a touchdown on the ground.

Dooley’s ability to attack defenses on ground and through the air has helped Valley’s offense throughout the season.

He has four touchdowns and two interceptions so far, and he’s had more than 100 rushing yards.

Dooley’s performance against Lanett is what earned him the award.

“It was a good game. It was competitive,” Dooley said. “I feel like I could’ve corrected some things, but overall, I feel like I played well.”

Dooley mentioned his favorite play from the win was a run where he carried three defenders with him.

Dooley’s ability to run and pass has made him a weapon, but he still wants to learn to read defenses better.

“When the pocket collapses, that’s when I run,” Dooley said. “If I see my receiver one-on-one, I trust my receiver to catch the ball.”

Dooley is in his second year as the Rams’ starting quarterback, and his season ending injury from last year isn’t bothering him.

“This year has been going good,” Dooley said. “I feel like I need to correct some things, but overall it’s pretty good. I haven’t had any problems with my injury so far.”

Valley will play Beauregard on Friday night, and Dooley will try to put up impressive stats again.

“I’m looking forward to fixing the mistakes I had during the Lanett game and pulling out a win,” Dooley said. “I need to stay in the pocket when I pass instead of rolling out every pass. I also want no interceptions and things like that. The strongest part of my game this year has been my running.”

Dooley feels like the biggest challenge against Beauregard is staying in the pocket when they blitz.

As for his recruitment, Dooley hasn’t received any additional offers, but he feels like they’ll start rolling in for football and basketball.