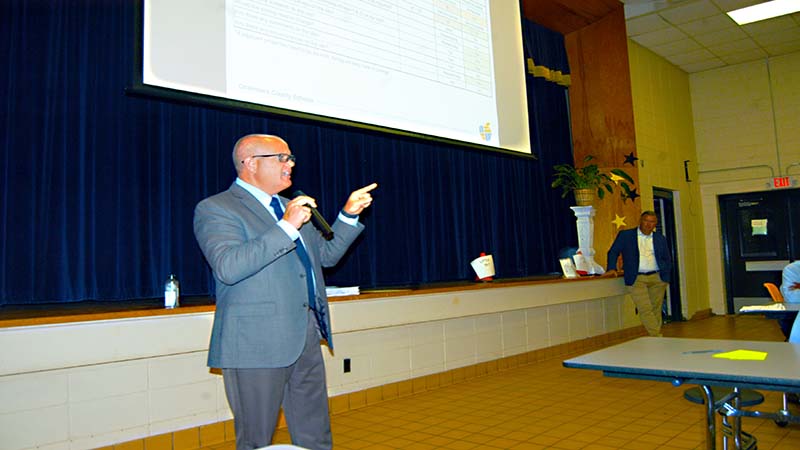 LaFAYETTE — A large gathering was present Monday at the first of two town hall-style meetings to discuss possible locations for a consolidated high school. It took place at 7 p.m. Central time in the lunchroom at Eastside Elementary School. A second meeting was held Tuesday in Valley after the newspaper’s press time.

Casey Chambley, superintendent of Chambers County Schools, said two meetings were planned to give residents of LaFayette and Valley the opportunity to be informed on what was taking place. Both presentations offered a chance to hear a presentation on what’s at stake and ask questions about an important decision that’s going to be made in the very near future.

The City of LaFayette and the City of Valley have each made offers to donate land for the new school. LaFayette is offering a site approximately 50 acres in size and has options on adjacent land to bring the total amount available up to 160 acres. Valley is offering a 73-acre site near Ram Stadium and Valley Sportplex. A new 6A football stadium like the one in Valley would cost approximately $12 million. A new high school building in Valley would probably need a new high school gym, something that’s not required in LaFayette.

If the LaFayette site is chosen and the site expands to 160 acres, advantages of that site is ample road frontage on the Torbert Parkway. A new school built there would be a most impressive sight for passersby on the highway. Another advantage is that high school students wouldn’t have to travel far to Inspire Academy. The big disadvantage is having to build a new football stadium on the campus.

Some of the LaFayette residents present asked why the new school couldn’t be built in the geographical center of the county — LaFayette — and the football games played at the stadium in Valley with the basketball games being played in the present LaFayette High gym, which is spacious.

Tracy Richter, vice president of planning services for the consulting company that’s currently assisting the local system, made a presentation about what’s been done so far in the way of proposed consolidation and offered a data analysis of the proposed two sites.

Factors that come into play now include finding the best ways of reducing costs in transportation, resources and staffing along with the cost of utilities. The utility costs include water, electricity, and plumbing. The cost of site modifications, road access and athletic fields also has to be considered.

What’s being visualized is a new high school designed for approximately 1,000 students. It will be in the 175,000 to 190,o00 range in terms of square feet. It’s expected to cost between $375 to $400 per square foot to build it. Without having to build a new 6A football stadium, the cost should come within the $70 to $75 million range. Building a new stadium would add $12 million to that.

Both sites look to be equal in terms of utility service. The needed geotechnical report and environmental site assessment has been done for the Valley site but has yet to be done for the LaFayette site. Both sites have had the topographical surveys done and both have wetland areas.

An ethnicity study shows that Valley High is a school with a slight white majority. The new school is projected to have a non-white majority of 522 to 397.

This is a reflection of population. The Valley zone has significantly more people than the LaFayette zone. They don’t have to travel far to school in Valley but have a longer way to go to a school in LaFayette. This adds up in the overall figures.

Moving forward, the timeline has the Chambers County School Board approving one of the two sites in October. The Justice Department, Legal Defense Fund and the federal court will start to review that decision that month and the educational specifications will be finalized. In November, all parties must come to an agreement and the site design process begins.

From December until May 2023, community conversations will take place on the identity of the new school. This will include its name, the school colors and the school nickname. Logistics issues such as a singular time zone will be agreed to. The site work and utility packages will begin in the summer of 2023.

A delegation of City of LaFayette officials including Mayor Kenneth Vines, City Clerk Louis Davidson, City Attorney Mac Tucker and Council Members Michael Ellis and Terry Mangrum wanted it clearly understood that LaFayette has more than 50 acres available for a potential high school site. Fifty acres is currently available and adjoins 110 surrounding acres the city has options on if the site is selected.

Most of the citizens who spoke at Monday’s LaFayette meeting favored building the school in LaFayette. One person said the LaFayette site was clearly better because more land is available (160 acres compared to 73).

“We are tired of being misinformed on this end of the county,” one person said to applause from the audience.

LaFayette Mayor Kenneth Vines attempted to clear up a possible misunderstanding between 50 and 110 acres. The city owns outright a 50-acre site and has options to purchase 110 more acres that surround it. That land will be purchased if the LaFayette site is chosen but will not be if the Valley site is selected.

If the LaFayette location is chosen by the school board, a total of 160 acres will be donated to the school district as a site to build the new high school.

Chambley said a federal judge told school officials to have two community meetings to discuss alternative school sites. “We are staying as close to that agreement as we can,” he said.

That decree was issued in July.

The decree also called for the formation of a 12-member desegregation advisory committee. Six of the members will be from the Valley area and six from the LaFayette district. This committee will work with the school board through the consolidation process.

Some citizens who spoke made the case that it’s unfair to make a decision on where to locate the school on population density alone.

A man in attendance said he had driven a school bus for the county system and had picked up kids who lived near the county line and drove them back home in the late afternoon. He picked them up not long after sunup and got them back home after sundown.

Another person said kids from the Valley area won’t have to make unduly long trips to LaFayette if the new high school is there.

One woman who spoke up said her children go to school in Valley, but it’s almost the same distance from her home to LaFayette. The school site, she said, didn’t make that much difference one way or the other to her.

Another woman suggested that the school board members take some of these long bus rides and think about what they will be putting children through if they pick the Valley site.

Many high school students don’t ride the bus. Many who are 16 or older drive to school or ride with another student.

Chambley said the school system is is constantly looking for ways to make bus transportation less costly and more efficient.

“We have purchased some new software that puts in the addresses of every student who rides a bus,” he said. “We are looking for the most efficient way we can do this. We are starting to shift to having air-conditioned buses.”

Chambley added that some city systems don’t offer bus transportation to their students.

There is a problem with fuel cost and fuel usage going up.

“We talk about this issue every day in our offices,” Chambley said. “We are looking at many factors in bus transportation. Only around 35 percent of our high school students are transported by bus.”

When one person present talked about longer drive times adding to the problems some parents or guardians are having in raising children, Chambley said he, the central office staff, teachers and board members were well aware of this.

“We know we have difficult situations in Chambers County and all across our state,” he said. “We have grandparents, aunts, uncles and foster parents raising kids today.”

A man who makes a living as a logger said he was concerned about 16-year-old kids who are accustomed to driving in the country and in LaFayette having to deal with traffic congestion in a city the size of Valley. He said he had seen how school traffic was very dangerous in a place like Opelika and was concerned it would be risky in Valley as well.

One woman said that Valley will continue growing whether or not it gets the new school, but it could be a death knell for LaFayette to lose its high school.

“It hurts my heart to think we may no longer have a high school in LaFayette,” she said. “Some people will move away if there’s no high school here.”

Chambley said there are good points and bad points with both sites being considered.

“We want to get that information to you,” he said.

“The school name, the mascot and the school colors aren’t important to me,” said another woman, “but having central location is. What’s going on here is that Valley is trying to do something they previously failed at. They want a city school system.”

That comment drew some applause from a pro-LaFayette crowd.

Chambley said that would not be taking place. There just isn’t the school population to start a new city system, he said.