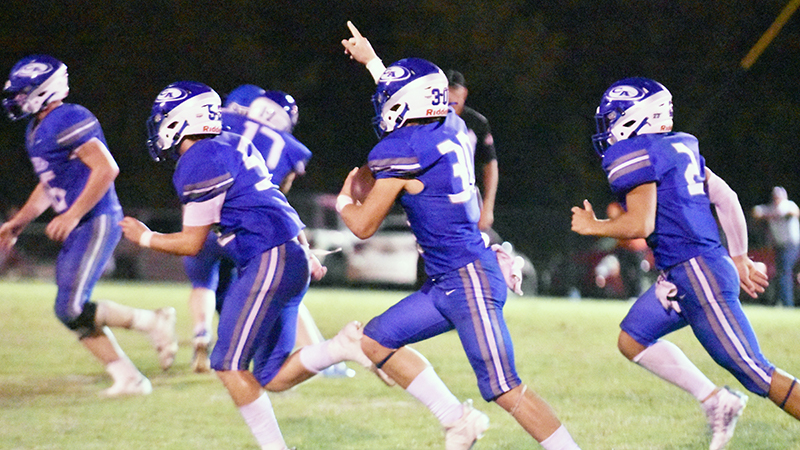 The game was moved to Thursday due to inclement weather expected on Friday.

The Rebels’ run game was unstoppable the entire night.

“We have to be good running the football because that’s who we are,” Chambers Academy head coach Jason Allen said.

“If we’re not any good at it, we’ll get beat. I continue to be impressed with our offensive line. They worked their tails off. I told them at the beginning of the year that I was going to put all my eggs into their basket. It took us awhie to figure out what they were doing. We made some adjustments, and I thought we played a dominant third quarter and wore them down.”

The first half was a ground-and-pound battle between the Rebels and Cougars.

Chambers Academy running back Luke Tarver had a 75-yard touchdown run on the first play of the game, but it was wiped away by a holding call.

It was a slow first quarter, but Tarver finally found the end zone after an efficient drive from the Rebels.

The Rebels got on the board again with another slow but effective drive when Tyson Hewett ran it in from the goal line to make it 14-0 Rebels.

The Cougars finally responded in the second quarter when Ashton Acreman caught a deep pass to make it 14-6 Rebels.

Chambers Academy had a solid two-minute drive at the end of the first half, but an interception erased any chance of points.

It was a sloppy and chippy first half, but the Rebels held outplayed the Cougars for the majority of the first 24 minutes.

The floodgates opened for the Rebels in the third quarter when the rushing attack was unstoppable.

The Rebels’ strategy to tire out the defense was proven effective as Tarver finished with three touchdowns.

Tarver also had one interception in the game.

“We call him ‘Chainsaw Tarver’ for a reason. He tries to tear up everything in his path like a chainsaw. He was a great player in our junior program and we knew what we had coming up with him being a sophomore. I’m glad he’s on our team.”

The Rebels are now 2-2 after starting the season with two losses, and Allen feels like his team is still respected despite their record.

“I think we have respect from what we’ve done the last seven years,” Allen said.

“We played two really good teams, and we didn’t get off to a really good start. We didn’t panic. We didn’t start pointing fingers. We kept playing and believing in our system, and we won two in a row. They call that a winning streak. We’ll continue to try to get better, but I like where our team is right now.”

As for what his team needs to work on heading into next week, Allen believes they need to pass the ball better.

“We got to work on throwing the ball better and work on penalties,” Allen said.

“We had too many holding penalties. We put the ball on the ground one time too many. We had a turnover on an interception. Zero turnovers is our standard, and we have to meet that every Friday.”

The Rebels will stay home next week to play Banks for the Rebels’ homecoming.

“They have a really good team, so we’re going to be ready to play,” Allen said.