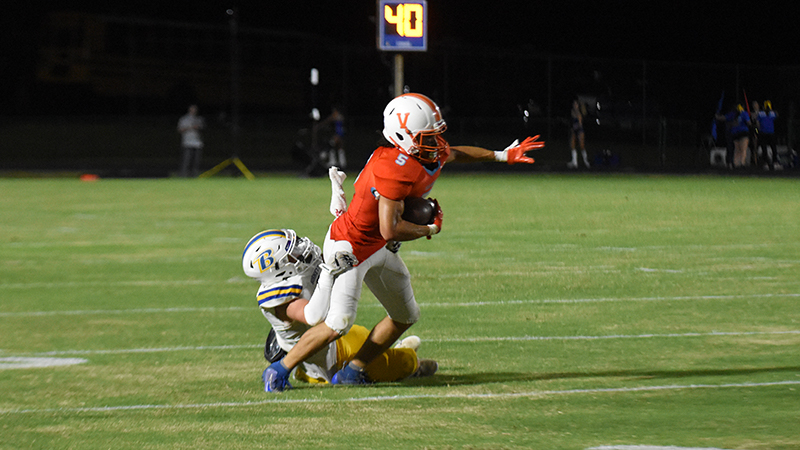 Valley wide receiver Chase Childs won this week’s athlete of the week award after posting a three touchdown performance on the road against Sylacauga last week.

Childs was a key part of the Rams’ 46-14 victory over the Tigers.

He had three carries for 88 yards and two receptions for 69 yards.

Childs credited his teammates with his performance.

“My teammates helped me out a lot,” Childs said. “They gave me the blocks I need. Cam [Dooley] gave me the ball I needed. It was really my teammates and the play calling.”

Childs was also glad to get back to winning after their home opener loss to Beauregard.

“It felt great,” Childs said. “After the tough loss to Beauregard, we had to come out here and bounce back. It felt good to get a win.”

One thing Childs has learned from this season is to be patient.

“You have to wait your turn,” Childs said. “If something doesn’t go right, just stay patient and everything will turn out fine.”

His goal for the season includes a playoff push and a football scholarship.

“Hopefully, we can get that big ring at the end of the season,” Childs said. “I want to get some offers and play at the next level. I’m just ready to get this thing rock n’ rolling next week.”

“Chase is one of those kids that’s been working hard all summer,” Hunter said. “He’s been preparing himself for that type of game. He’s improved every week. His run blocking has improved. His route running has improved. He’s good at catching the football.”

Hunter also mentioned that Childs is now getting reps at running back.

“Now, he’s mixing in at running back, and he’s doing a good job,” Hunter said. “He’ll get touches every once in a while. There’s a lot more stuff we can do with him now that we’ve seen what potential he has.”

Through four games this season, Childs has six carries for 97 yards, 9 receptions for 173 yards and 5 total touchdowns.

He’s a senior, and although he doesn’t have any offers, his increase in utility at running back will not only help him but Valley’s offense as well.

The Rams have a bye week this week, but they’ll return to Ram Stadium for only the second time this season to face region opponent Russell County on Sept. 23.