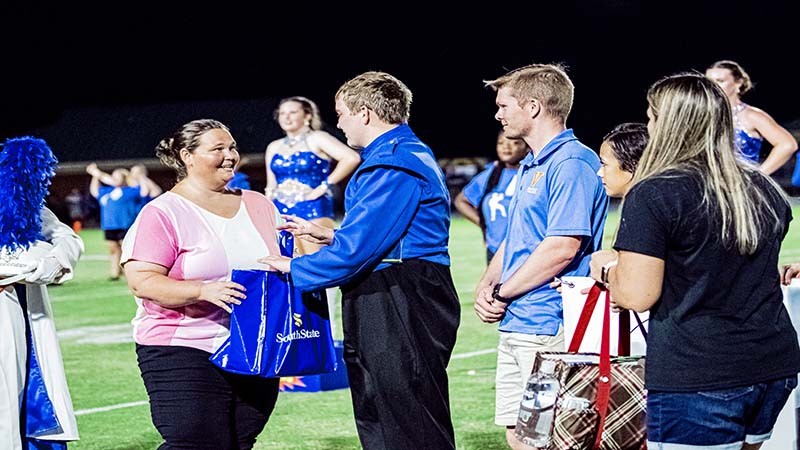 At Friday night’s football game, Valley High School — led by the school’s band and cheerleaders — made a donation to a student from Beauregard High School dealing with a recent cancer diagnosis.

Now, just a few days later, everyone is celebrating the good news of an unexpected, cancer-free diagnosis.

Beauregard High drum major Matt Martin, currently in his junior year, and his family. Matt’s older brother, Alex Martin, a senior at BHS, had recently been diagnosed with cancer.

On Tuesday, Alex received news that his latest cancer tests came back and showed no cancer.

Jamie Capps, Alex’s mom, had planned to return the donation back to Valley High.

After the good news, Capps sought out everyone who had donated to the family so she could return any gifts received.

“We were so blessed and wanted to give it back,” Capps said. “We’re trying to do the right thing.”

After Valley High found out that Alex was cancer free, the school decided to let Alex and his family keep the donations as a gift and to pay for any costs that came the family’s way.

“They have just found out that the child is cancer free now. However, we are devoted to their donation for them to help pay past medical bills and celebrate the great news,” DeLoach said. “The mom has wanted to bring the donations back, but we are telling her to keep it; it was a love offering, and we are sure that their expenses that they need to help cover.”

DeLoach had said the donation came together after a discussion with Valley High cheerleading sponsor Chelsea Bunn.

“The cheerleader sponsor, Mrs. Chelsea Bunn, knew about Alex Martin having cancer, and she called me to explain and to ask if we could join forces and take up donations for the family,” DeLoach said.

With the collaboration of the Valley High cheer team and the Valley High band, Alex and his family received a care basket, money donations, gift cards, and a shirt that read, “Valley band is Alex Martin strong.”

“This was literally done just in two days and just for our student-athletes and Band to show love and support to another local student,” DeLoach said. “The gift cards and money were to help with gas and food as the family will be traveling to the children’s hospital in Birmingham a good bit,” DeLoach said.

“It was just one of the nicest and most thoughtful gestures of kindness I witnessed in a long time,” Hillsman said.