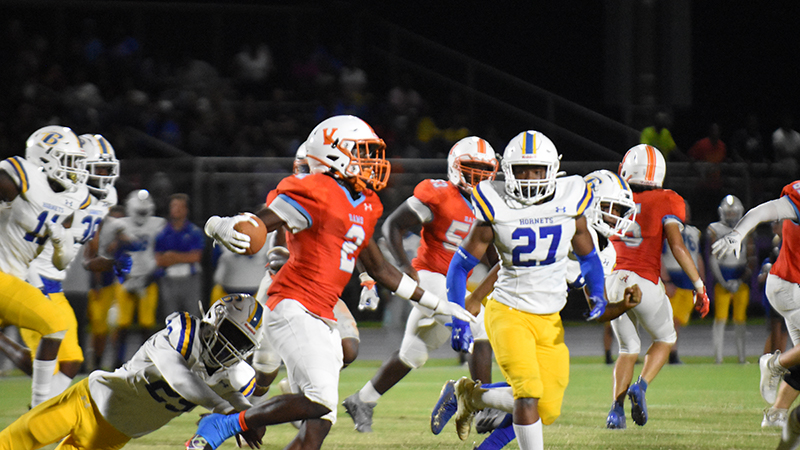 Valley defensive back Jay Harper has received three scholarship offers from Marshall, Kentucky and Tuskegee in the past two weeks.

He received offers from Marshall and Tuskegee last week, and he received his offer from Kentucky on Sunday.

Harper is now up to four offers after receiving his first offer from UAB back in August.

Harper has 16 tackles, an interception and a punt return touchdown through three games this year.

His touchdown against Handley in week zero helped the Rams make the game close toward the end.

All four schools who have offered him are recruiting Harper to play defensive back.

“The coaches like my ball skills and my knowledge of the game,” Harper said.

Although he’s only played three games this season, Harper has learned a lot so far.

“I’ve learned to just play my game,” Harper said. “Don’t listen to anybody else. I just need to do what I know I can do.”

“I’m expecting another offer in a few days,” Harper said. “I’ve been hearing from a lot of coaches from schools like Vanderbilt and Harvard.”

Harper mentioned he does want to play in the SEC.

“I’m very excited,” Harper said. “I want to play in the SEC, and now I have an opportunity to.”

Although Harper has an offer from an SEC school, he doesn’t currently have a top school.

Harper has been working with his coaches and his trainer to get exposure from colleges.

“I’m taking in all of it, and I’m staying humble,” Harper said. “I’m sending out my film, and I have a trainer. Shoutout to ALLGAS training.”

Valley head coach Adam Hunter has been impressed with Harper this season.

“He worked hard in the offseason,” Hunter said. “He’s gotten a lot better with his technique at corner. It paid off. He went to a lot of camps and got exposure.”

Hunter wants Harper to get even better over the course of the season.

“I think he needs to keep improving his work ethic,” Hunter said. “If he keeps improving that, the future is bright for him.”

He’s also waiting for a few other offers, and Harper plans to commit sometime before his senior year.

“I want to be committed before my senior year, so I can relieve all that pressure and know where I want to go,” Harper said.

He will also be visiting Auburn this weekend.