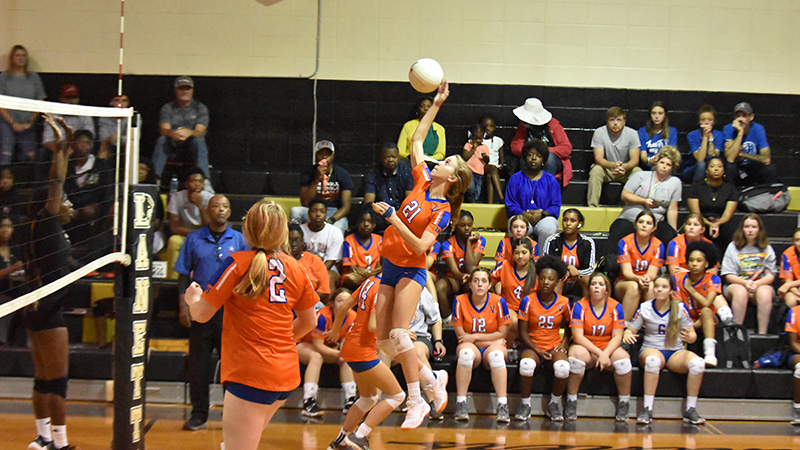 In what could be the final volleyball game ever between Lanett and Valley, the Lady Rams won a 3-2 thriller over the Panthers on Monday night.

The Lady Rams started out strong as they won the first game 25-20.

The third game was a shootout, but the Lady Rams eventually won the key game 25-20.

Facing defeat, the Panthers stormed back to win game four 27-25 in a back-and-forth battle.

The fifth game was more of the same, as neither team would create a large lead.

The Lady Rams ended up winning the game 16-14, after a Panthers mistake.

“I’m tired and out of breath,” Messer said.

“That was great. It came down to the last point. I’m so proud of them.. They did their thing. I can’t brag on them enough today. This was their best performance of the year.”

Messer was pleased with her girls’ cohesion.

“The teamwork and chemistry was there,” Messer said.

“They were working so well together. They were making plays at the right time. They played smart. We haven’t done that much, but we did that today.”

Messer feels like the big win was a confidence booster for her team.

“We have an area game tomorrow,” Messer said.

“That was a big motivation for us. I want to thank the fans in the stands. I’m just so proud of the girls.”

As for Lanett, that was only their second loss of the season. Head coach Krisse Story knows there’s work to be done.

“We started off a little slow,” Story said.

“With us going down in that first set, it just set us back. I was pleased with the way they fought back. I found out they’re fighters. I’m excited about their determination.”

Story wasn’t really pleased with any area of her team’s performance except for their fight.

“We didn’t serve well,” Story said. “We didn’t block well. We didn’t pass well. The grit they showed was about it.”

The Panthers also had support from the Point volleyball team, who cheered them on the whole game.

“That was very exciting,” Story said. “They brought a lot of energy and excitement to the girls.”

Valley will travel to play Beauregard on Tuesday.

Lanett will return home to play Notasulga on Wednesday as the season winds down for both of these teams.