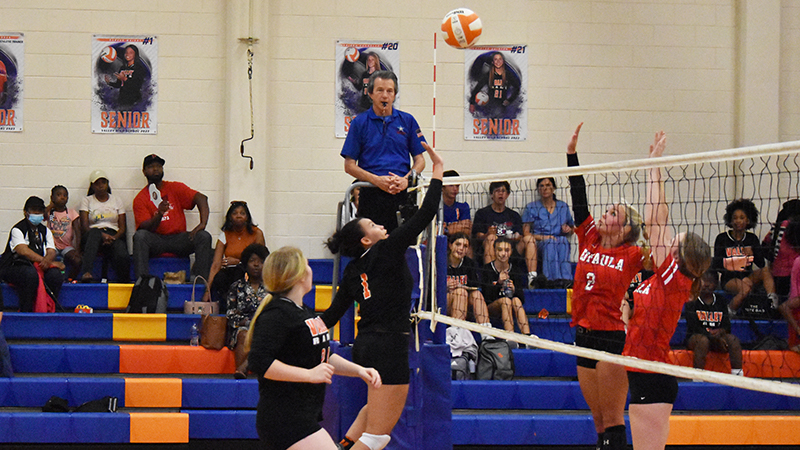 The Valley varsity volleyball team lost to Eufala 3-0 at home on Tuesday night.

The junior varsity team also played, but they lost 2-0. Although Eufala is a really good team, the Lady Rams struggled to get going early in the match.

Eufala had a 13-1 lead in the first game, which forced the Lady Rams to take a timeout. Although Valley fought back, the Lady Tigers ended up winning the first game 25-12. The second game was much better for the Lady Rams, but they still lost 25-17.

The third game was full of errors that led to the Lady Tigers winning 25-14.

“It’s like I’ve been stressing to the girls lately. We have to play every set start to finish,” Messer said.

“We start out strong, and then we go downhill. We’re not getting back up. That’s something they need to work on. That’s just about mentality. It has nothing to do with physical ability. They’re just as capable as these other teams.”

Messer feels like her team matches up with Eufala, but they got too down on themselves.

“Sometimes, our girls just get in their own heads. They need to keep their composure and stay calm throughout the match. We need to make sure we’re keeping our teammates up. We need to keep our serves. That’s a huge part of the game. We may change our rotation around a bit.”

Despite the loss, Messer was pleased with her girls’ play at the net.

“I was pleased with their attacking,” Messer said.

“You have Darcee Wright and Charlee Quinton. They were attacking the ball really well. They always do. I was impressed with them. When we get a good set for them, they’re going to smash it every time.”

Eufala head coach Merri Hicks was pleased with her team, but she also was  impressed by the Lady Rams.

“We played a lot better than we’ve been playing. We have to work on passing, but overall, I’m confident in the win we got today. Valley has come a long way. They hit hard. They have some powerful hitters. I love their energy on and off the court.”

Hicks’ strategy was to win early, and they did just that.

Eufala is now 11-5, and they have defeated Valley twice this year.

The Lady Rams dropped to 3-8 on the season, and they’ll travel to LaFayette to play the Bulldogs on Thursday.