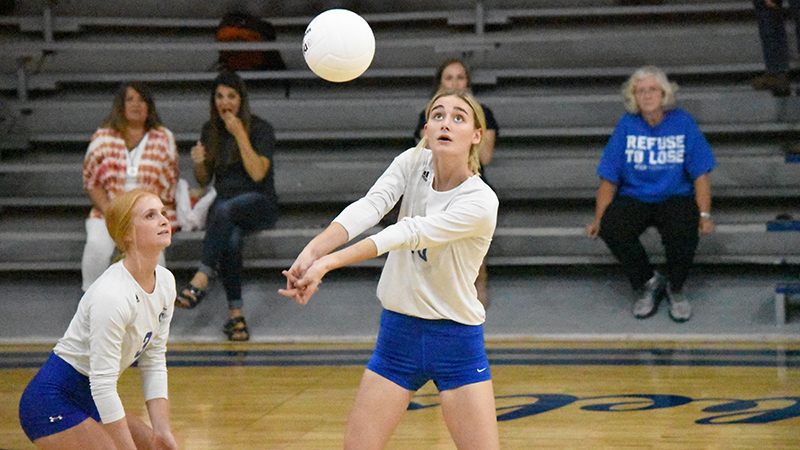 The Lady Rebels played their best game of the season in their 3-2 loss to the Fort Dale Eagles at home on Thursday night.

Fort Dale dominated the first two games 25-8, but the Rebels rallied to win the next two games.

The fifth set was close, but the Rebels couldn’t pull away as the Eagles won 15-12.

Chambers Academy has dealt with tons of adversity this season as they’ve had two different head coaches and three different assistants throughout the season.

The Rebels hired Morgan Pepper as head coach over the summer, but she took another job.

Jessica Patterson is now the head coach of the Rebels, and she plans to stay.

Her team is young, and she’s in the middle of her first season as a head coach.

“In the first two games… It’s like we showed up, and we forgot everything we’ve ever done in our whole life of volleyball,” Patterson said. “Something just switched in them. I’ve been telling them the whole season that we’ve just been teetering. I don’t know what it is, but we just have to get over the hump. As soon as you do, things are going to start falling into place. In the third game, things started falling into place. They started being where they were supposed to be. They weren’t overthinking it. They gave their entire selves on the court. They needed this.”

Patterson also thought the pressure of winning got to her girls in the fifth game.

“Even I was about to die on the sideline,” Patterson said jokingly. “Those are things we’ve been trying to talk to them about like mental toughness and just blocking it all out. They just need to focus on you on the court. I can’t say anything bad. I’m so proud of them.”

Patterson wants her team to take the energy they had Thursday night throughout the rest of the season.

“I want them to bottle that up and take it with them to the next place they go,” Patterson said. “I’m hoping that now that they know what it feels like that it’ll be there every game. They just need that confidence booster. For most of these girls, this is their first year even stepping out on the court.”

The Lady Rebels have also dealt with assistant coaching changes over the last week.

The Lady Rebels have hired Heather Forbus and David Howard as assistants. Howard was with the team last year, and he focuses on the junior varsity team while also leading drills in practice.

Patterson wants her girls to know that all three coaches are there to stay.

“If that was me on the court, I would think everybody just gives up on us,” Patterson said. “I told the girls that we’re here. We’re committed, and none of us are going anywhere. They need reassurance, and I feel like this flow of coaches is going to be good.”

Howard knows that there needs to be more consistency with the coaching.

“There was a lack of congruency, and I had some good relationships with the girls,” Howard said.

“I just want to support them. They kind of lost all of their leadership from last year to this year.”