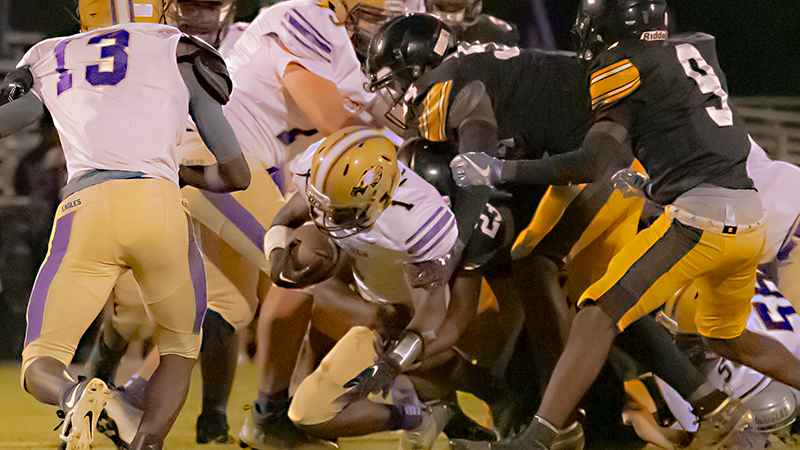 The LaFayette Bulldogs dropped its first home game of the season 60-28 inside Bulldog stadium against the Goshen Eagles.

Both teams started sluggish, turning the ball over on each of its first possessions. Things began to pick up with 2:53 left in the first quarter when Zavion Turner blasted around the right edge and scored from 42 yards out, putting the Bulldogs up 6-0. Less than a minute later, Goshen said watch what we do and struck back with a three-play 48-yard touchdown drive to tie the game 6-6, and that is how quarter number one ended.

LaFayette’s drive stalled to start the second quarter, and the scoring blitz began. First, a 22-yard touchdown pass by Goshen and a failed 2-point conversion put the Eagles up 12-6, and again less than one minute later, LaFayette answered with a 61-yard bomb from Tazarius Towles to Joshua Combs, taking the lead 14-12.

Goshen took a 32-14 lead into the half after Towles threw a pick-six to Eagles Andrew Galloway.

The second half began the way the first ended, with a chunk play from Goshen finding the end zone.

The Bulldogs put together a few more chunk-scoring plays but could not find a way to stop the Eagles.

Towles found Combs again in the end zone late in the third period but gave up a 75-yard Jamari McClure run, pushing the score to 45-20.

Penalties and miscues plagued the Bulldogs most of the night, never allowing them to get out of its way long enough to shrink the deficit.

Head Coach Juan Williams said his team is young after the game and the adversity they have to face is difficult to overcome.

The Bulldogs are now 1-4 on the season and will go into an open week and then return to Bulldog Stadium to face Horsehoe Bend for homecoming.