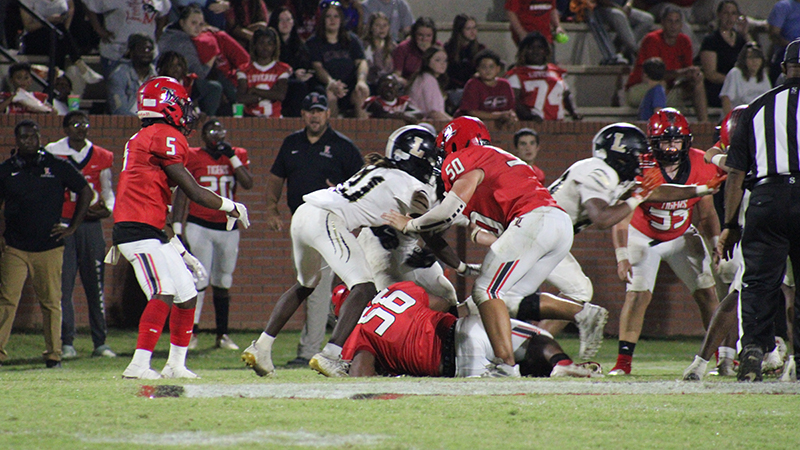 The Lanett Panthers dropped their second region game of the season 26-25 at Luverne on Friday night.

The Panthers took a massive 19-6 lead in the first half, but the Tigers stormed back to win 26-25 on their homecoming.

Mistakes cost the Panthers in the second half, and some key penalties ended up being the achilles’ heel for Lanett.

Lanett head coach Clifford Story knows that his team needs to be more disciplined down the line.

“We had a 19-6 lead at halftime. We came out in the second half, and just had a meltdown. We threw a deep ball to Nakia Bynum for a touchdown. We had two costly turnovers on the next drives, and they capitalized off it.”

The game ended with Luverne attempting an extra point to tie the game at 25, but the Panthers jumped offsides, and the Tigers were able to get the two point conversion to win.

“I can’t say why it happened. A lot of it is just we don’t know enough about football. We had mistakes that just young kids make. We’re not where we should be, but that’s not going to change my coaching. It starts with me. I’m going to work every week to try and make our kids better. We’re just still making mental mistakes and being selfish. We’re just not playing Lanett football right now.”

Story wants his guys to understand that there’s a lot of season left.

“We want them to understand the season can still be saved,” Story said.

“We lost our second region game. At the end of the day, we have to keep playing.”

Lanett dropped to 2-3 on the season, and they’ll have to face 4A Handley at Morgan-Washburn Stadium next week.