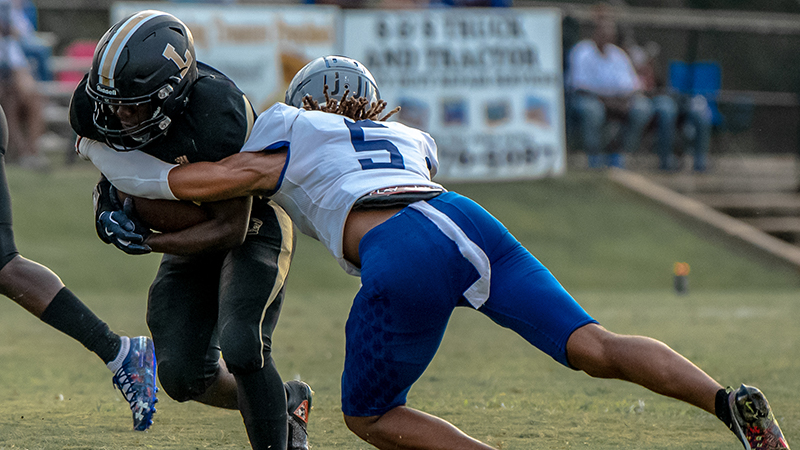 It looked as if Lanett was going to be able to control the tempo of the game on the ground early, taking the opening possession 60 yards. Jarrious Goodman punched the ball in the end zone from the 2-yard line, putting the Panthers on the board 6-0.

The Panthers’ stout run defense forced a Highland Home punt that the Flying Squadron muffed and Lanett recovered deep inside Highland Home’s 20-yard line. Unfortunately for Lanett, the Panthers were unable to cash in the turnover and gave the ball right back.

With less than a minute to go in the first half, it looked like Highland Home was going to take the lead, but Elijah Whitfield came up with a huge interception in the end zone as the clock hit zero.

The Panthers once again had the Squadron behind the sticks in a punting situation, but an offsides penalty moved the ball up five yards, and Highland Home unleashed 4-star Florida State Seminole commit Keldric Faulk as he picked up the fourth and 8 that eventually led to Squadron touchdown and a 14-6 lead.

The Flying Squadron took a 21-6 lead into the final quarter where the Panthers found its backs against the wall, playing behind the chains and facing adversity that head coach Clifford Story says they are not used to.

“We come out [of the half], and we jump offsides, they go for it, they get it, [and] score off that drive,” Story said. “Then, you know when you’ve got a young team they don’t know how to fight through adversity yet. We just have to keep working.”

Story’s young team kept the fight up in the fourth quarter scoring 12 unanswered points, led by big-time pass plays from Goodman to Elijah and Alajawon Whitfield but could not execute a final squib kick with 1:06 left in the game.

After the game, Story gave credit to Highland Home, saying they were the better team and the difference maker in the game was the offensive line, who struggled to open holes for the running game.

“We got beat by a better football team. We’re just going to keep working and try to get better week by week,” Story said. “ But you know our offensive line, I knew they’re gonna be our weaknesses coming in, but they get better each week they’re fighting. You have a Florida State commit on one side and a dog in number 10 on the other, it makes things difficult, especially when you can’t get the running game going in the second half.”

Story says everything missing can be fixed with some more practice.

Lanett fell to 2-2 overall, 1-1 in region play. The Panthers travel to Luverne next Friday.