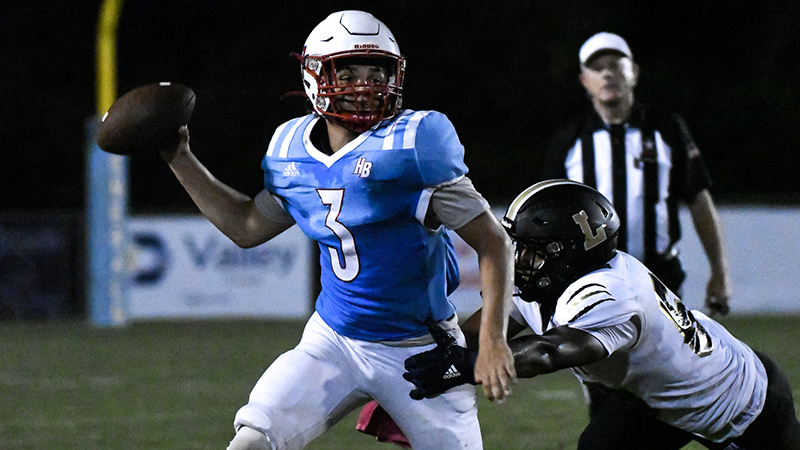 Horseshoe Bend students showed up dressed out in hard hats and orange vests hoping to help their home team construct a historical win over 2A Region 3 rival Lanett at home on Friday night.

Lanett had different plans and brought their imaginative sledgehammers that broke through Horseshoe Bend’s defense to score 39 points en route to a 39-6 win.

after scores by both teams, as Horseshoe Bend quarterback James Smith lobbed a pylon

Under duress during the second quarter from an incoming rushing linebacker, Smith tossed the

ball into the air to what was a wide-open receiver, before watching the ball float for what

himself underneath for the interception.

“New rule in high school, just throw it away, and that’s something we’ve got to work with. Just

a little bit of decision making there, but I think we’ll be able to work on that in the upcoming

away when under pressure instead of taking a sack, so long as the quarterback is out of the

passer’s pocket and the ball passes the neutral zone.

Outside of the turnovers, Phillips wasn’t pleased with his team’s performance against a

“We didn’t show up; we thought we had opportunities, especially in the first half. In a ball game

against these guys, you gotta score touchdowns, and we just weren’t able to,” Phillips said.

“Blown coverages, missed blocking assignments. Playing a good team, you can’t do that kind of stuff.”

The Tigers muffed a punt return in the third quarter that Generals’ linebacker Ethan Mitchell scooped up inside of the red zone, but the team ultimately failed to advance the ball to the

for the first matchup in years as Horseshoe Bend made the move from 2A region 3 to region 4.

Lanett is home next week against Highland Home.