Lanett shut out by Handley 37-0 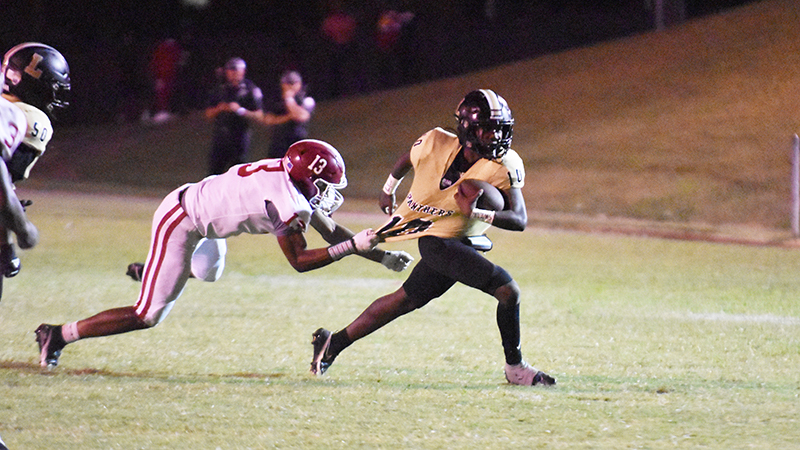 Offensive woes continued to plague the Lanett Panthers as they were shut out by the Handley Tigers 37-0 at Morgan-Washburn Stadium on Friday night.

This was Lanett’s second scoreless game of the season.

Lanett head coach Clifford Story knows that some early mistakes were a killer for his team.

“Handley is a very good team,” Story said. “They’re a very physical team. They hit us in the mouth. We just didn’t respond. We shot ourselves in the foot in the first six minutes of the game. We didn’t fight back. There are a lot of things we need to keep working on. I’m trying to figure out the ins and outs of how to get them going in the right direction. Everybody was pointing fingers. I’ve been in this position before, and I’ll figure it out.”

The first half was a complete disaster for the Panthers.

Handley was without their star running back, Jamarius Haynes, but Elijah Goss did a good job as the backup with two first-half rushing touchdowns.

Lanett’s offense couldn’t get going, and the Panthers botched the snap on their first offensive play, which resulted in a safety.

They didn’t have any turnovers in the first half, but quarterback Jarrious Goodman suffered a thumb injury in the second quarter.

Lanett’s young offensive line continued to get dominated by the Tiger defense, and the Panthers couldn’t stop Handley on third down.

The Panthers went into halftime down 30-0.

The second half was and exchange of p0ssessions as the Panthers had to use multiple players at quarterback. Story provided an update on Goodman’s injury.

“It doesn’t look too good the way his thumb was displaced,” Story said. “It looks broken, but I’m not a doctor. We’ll take him to the orthopedic clinic from there.”

Lanett will have to find answers at quarterback, but Story isn’t ready to name a starter just yet.

“I’m going to put my best athlete at quarterback. It’s probably going to be Elijah Whitfield. I’ll let Keondae Hughley do some things. I saw some great things from him throwing the ball tonight. Moving forward, we just have to put the ball in our best athlete’s hand, and hopefully our offensive line will continue to grow up and give ourselves a chance to win. We have some major region games coming up, and I’m confident in those guys. We’re going to get back in the lab and get stuff fixed.”

Story feels like his team needs to work on the mental side of the game this week.

“We need to focus on mental toughness,” Story said. “We’re just so weak minded right now. It’s just the smaller things. I’m going to spend  lot of time just figuring out what we need to do moving forward. I’m lost for words at some of the stuff, especially with the few seniors we have. Sometimes, it’s just like that. You have to get a win to overcome some of the things that were going on.”

Lanett suffered their second shutout of the season, but the good news is both of those came to 4A and 5A teams.

The Panthers are now 2-4 on the season, which is the first time they’ve lost four games through six weeks since 2011.

The Panthers are still hanging on to fourth place in their region, but they’ll have to travel to Notasulga next week to face a Reeltown team who sits at the top of the region standings.