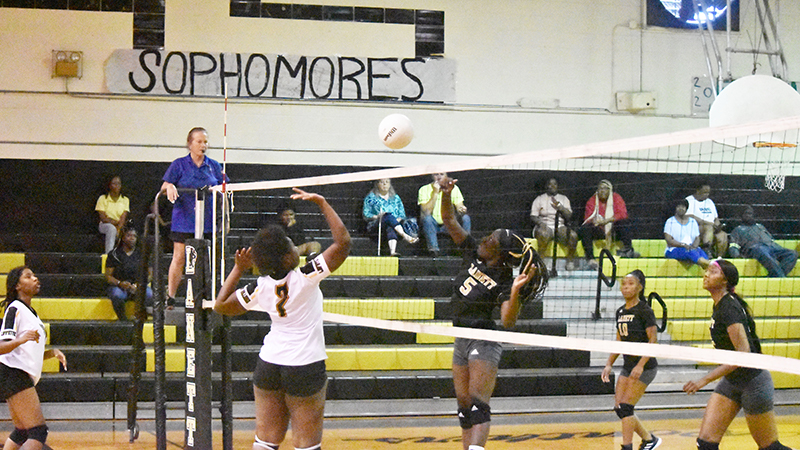 The Lanett varsity volleyball team got back in the win column after shutting out the LaFayette Bulldogs at home on Tuesday night.

Lanett was coming off of a 3-1 loss to Horseshoe Bend that was mainly attributed to their almost two week break between games.

They now not only get a confidence boosting win, they also get an area win.

Lanett head coach Krisse Story was pleased with her girls’ performance, even though it wasn’t the most exciting game.

“We were very disappointed after the area loss to Horseshoe Bend. It wasn’t the most thrilling win, but a win is a win. We’ll take it.”

Story thought her girls improved on their serving and communication from the last game.

“Last night, we were just quiet.”

The Panthers will have a six day break before their next game, and Story is trying to keep them prepared for games despite having time off.

“I thought about it long and hard,” Story said.

“I was up all night thinking about it. We’re going to have an open gym tomorrow. We’re probably going to have a scrimmage Thursday to give them that game feel.”

As for LaFayette, they were coming off of a ten day break.

Head coach Chase Lewis believes that contributed to his girls’ lack of energy.

“We had no energy in all three games,” Lewis said.

“We’re improving. Us being off hurts because we’re still beginners. We need to keep playing. It’s not practice anymore. We have to find the energy before we get in the gym. We have to be physical and focused. If we’re not focused, we’re going to catch a beating every night like we did tonight.”

The Panthers are now 5-1, and they officially swept the Bulldogs in the regular season.

The Bulldogs are looking for their first win of the season, but lack of depth and experience have made it tougher to find that first win.