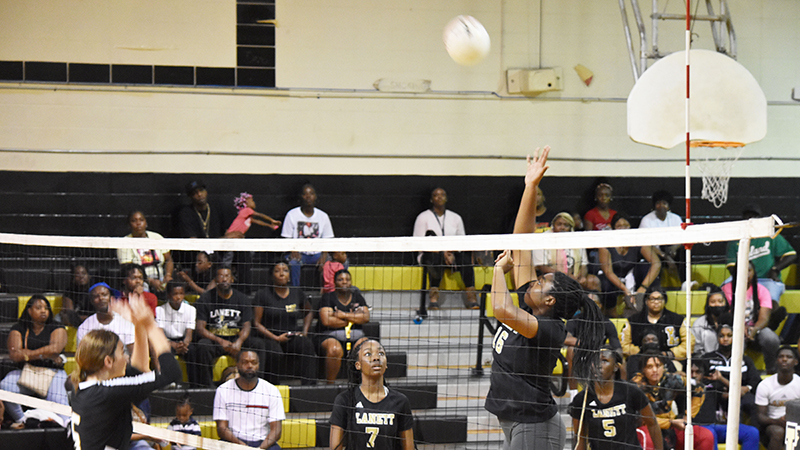 Lanett volleyball star Makiah White has won week four’s athlete of the week award after helping the Panthers dominate in the month of August.

White is a sophomore who joined the team this year after her family moved to Lanett.

Her mother, Jaunelle, is the Vice President of Intercollegiate Athletics at Point University.

Makiah lost her father, Marcus, a couple weeks ago. Volleyball has been a way for her to cope with loss.

“The best thing for me would be to carry on with my life,” White said. “Coach [Story] told us over the summer when we lost our JV coach that you can either live and breathe or grieve and die. I took that and decided I was going to breathe and be here for my team. That’s what helped me push through to continue playing and being the best I can.”

White has been a key part of Lanett’s 4-0 start.

“It’s an honor. I’m glad that people look up to me and see me as a leader and a friend as someone who can help that with anything,” White said. “That just helps me keep going.”

White feels like the best part of her game is her blocking and serving.

“I’ve learned that there are ways to cope with different things if you have people to lean back on,” White said. “You don’t have to carry everything by yourself.”

As for her success this season, White will continue to improve in practice.

“You work really hard in practice,” White said. “You build bonds with everyone and work on communication. Practice carries over to the game. You just trust each other to keep going.”

“She’s a very mature leader for her age,” Story said. “She led practice today even though I had a faculty meeting. We had an open gym yesterday, but she was one of the first ones here. She’s been able to guide our younger girls, and that just comes natural to her.”

Story feels like her maturity and leadership has helped her through these trying times.

“That’s one of the reasons I did open gym yesterday,” Story said. “I want her to always have a place of respite. Her problems are outside the confines of our gym. I think her faith in God has helped her in the trying times. She has a strong family.”

White is a leader on the court, but Story is also impressed by her skills.

“She came in as a strong player,” Story said. “I’ve been very impressed with her blocking. Her serving is phenomenal. It all goes back to her leadership. I believe that leadership helps to develop everything that comes after that.”

Story wants her to keep working on blocking over the year.

“I’m grateful that we inherited Makiah with her family moving here,” Story said. “She’s been an asset not only to volleyball but to basketball. She’s been an asset to our community not only in athletics but in the classroom as well. She’s one of the easiest people I’ve had the opportunity to coach.”