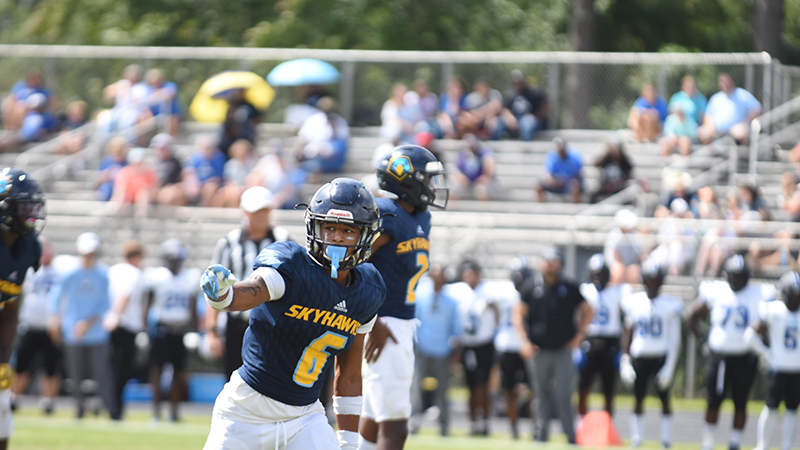 Point’s football team has started slow, but they’re seeing some improvement as they have to travel to McKenzie, Tennessee to face Bethel.

Point is coming off of a 14-10 loss to Faulkner in a game where the Skyhawks struggled heavily on offense.

Bethel is a NAIA team who is part of the Mid-South Conference.

Defensively, Point is only allowing 240 yards per game. The Skyhawks don’t have many issues moving the ball as they’re averaging 314 yards per game, but they struggle to score in the red zone.

The Skyhawks have made six red zone trips this season, but they’ve only scored on half of those.

“We’ve emphasized the red zone this week,” Point head coach Trevor Zeiders said. “We need to make plays. We’ve done different situations. Yesterday we put the ball on the nine and did a first-and-goal with nine seconds left.”

Bethel is 2-0, and they’re coming off of a win over ninth-ranked Reinhardt.

The Skyhawks will rely on the play of quarterback Brenton White to lead them to their first win of the season.

White has been the best of Point’s three quarterbacks as far as moving the ball. His 52.4% completion percentage is better than the other two by 17%.

The Skyhawks have also struggled with penalties this season, especially in the red zone.

“That’s discipline,” Zeiders said. “You can’t make mistakes in those situations and expect to have great success. It could be first-and-goal from the three, and next thing you know it’s first-and-eight.”

Point will have to figure out how to stop Bethel’s balanced offensive attack while scoring on their stingy defense.

Bethel is only allowing 7.5 points per game this season.

The Skyhawks will also have to figure out how to spread the ball around in the passing game.

Receiver Emery Bryant has 173 yards, which is 109 more than the next receiver on the team. Point will play the Wildcats at 2 p.m. EST on Saturday at Wildcat Stadium.