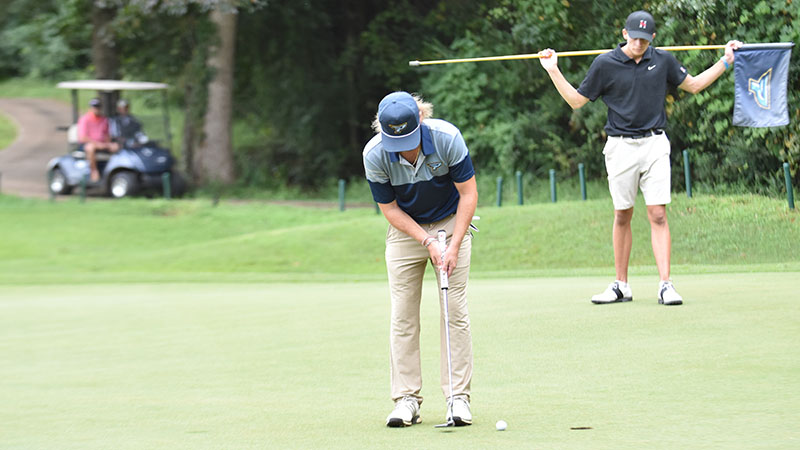 The Point men’s golf team is coming off of a win at their home course in the Point Invitational, but now they’ll have to travel to Maryville, Tennessee this weekend to play in the Maryville College Invitational.

Point is also ranked eighth in the National Association of Intercollegiate Athletics. The Skyhawks will travel with five players to face off against twelve other teams from the NAIA and NCAA division three.

Point’s Trevor Poole led the Skyhawks in scoring at the Point Invitational with an even score through two rounds.

The Skyhawks will be without first team All-American Cole Stevens, who won’t join the team until the spring due to personal reasons.

The Skyhawks will be playing at the WindRiver Golf Course in Lenoir City, Tennessee.

The course will be a challenge since it’s located in the smoky mountains.

Luckily for Point, the weather will be ideal for golf.

Last season, the Skyhawks played at WindRiver in the spring, and it snowed right before their first round. They’ll have moderate temperatures and sunny skies all weekend.

Even though the Skyhawks will be without their first team All-American, Lytle believes he’ll have five guys who can still get a win.

Point’s lead golfer this weekend will be Trevor Poole.

Froden will be playing as an individual, so his score will not count toward the team score.

Poole is the only senior in the group, and the rest are freshmen.

“Trevor is coming off of a good year for us,” Lytle said.

“He had two individual wins. He’s been good for us again this year. He’s a consistent golfer. He won’t necessarily shoot eight-or-nine-under, but he’s also not going to shoot three-or-four-over. He’s a really solid player.”

Neiuwoudt will be the number two golfer for Point this weekend after the team held qualifying all week long.

“He’s kind of the same as Trevor,” Lytle said.

Point will play Friday and Saturday at WindRiver Golf Club.